The Economist strictly uses a family of typefaces specially created for the magazine. I could not find all of the family members listed, but the most used typeface (for the body copy) is Ecotype. Officina is used for cover headlines and navigational information.

The nameplate of The Economist is actually very simple, using (from what I could tell) was Ecotype, the typeface used for body copy, or a typeface very similar to that, which has a very slight serif. The typeface gives off a very formal and practical vibe, which works well to embody the overall feeling that the magazine presents to its readers. 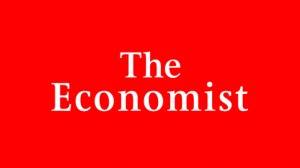 As a sans serif typeface, Officina is meant to be easy to read. It appears in the magazine as a bold font, and is not only used for headlines, but is used for dates as well as photo captions. Occasionally Officina is used unbolded, but the only time I saw this approach was with the issue date listed at the start of each new section. Officina is used to catch your attention, which it does in a minimalist way and stands out amongst the block of serif body copy that consumes most of the page. I personally do not find it to be a beautiful typeface, but it is practical and does its job well, which makes it a good fit for The Economist.

Ecotype, which is used for the body copy is a serif typeface. Like Officina it is a practical typeface, and is fairly similar to Times New Roman. It is easy to read and is the most used typeface throughout the magazine. Not only is it used for body copy, but a bold version is used for inside heds and deks. From a grid standpoint, all of the letters align perfectly horizontally.

The size of text is very uniform throughout the magazine. Teasers (as seen in the previous photograph) are all typed in the same size. The hed always appears as the largest text. The dek and body copy are both the same size, though the dek is bold to create a sense of hierarchy. This format is used in the entire magazine and never changes, with the exception of special reports, but even then the format only varies slightly.

Overall there isn’t a lot of character to The Economist’s typeface family, but that is how it is suppose to be. There are no names of journalists attached to each story, which is done to create just one voice and one identity that is The Economist. That is also how the typeface family works in the magazineIt is not suppose to burden the text, it is just there to simply tell the news.