I discovered a really awesome Portuguese newspaper startup called “i” that was launched sometime in 2009. The design is absolutely beautiful – extremely eye catching, lots of color, and a really unique use of space. Here are a few examples: 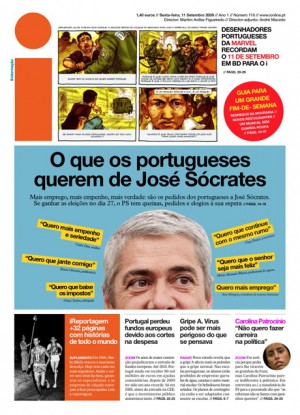 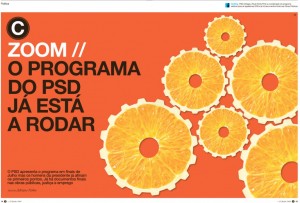 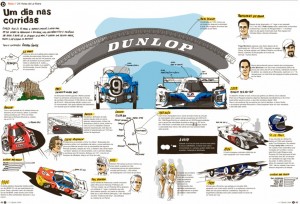 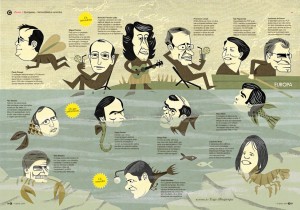 I think there’s something to be said for the fact that the paper’s vibrancy was what really caught my attention initially (especially because I certainly can’t read the language that the stories are written in…). It has such a fresh, young feel that I think could really encourage readers – especially younger ones – to start paying attention to current events. Maybe this is part of the key to the future of newspapers. We hear all the time about how young people don’t know what’s going on in the world, because they’re too preoccupied with technology and other trivial things. Well, maybe the newspaper industry needs to think about changing – adapting new ways to grab the short attention span of the next generation of readers.

The design reminds me a lot of Wired magazine – that precarious but successful balance between beauty, vibrancy and total chaos. I love it. And I love the info graphics, cartoons and photography.

The article also included a short video about the newspaper (with subtitles), and I’d encourage anyone to watch it if you have the time. The video talks a lot about what makes i different, both graphically and editorially. It’s clear that they’re trying to change how people view newspapers. One of my favorite quotes from the video that I think really illustrates what i is all about is that the paper brings together “the aggressiveness that dallies have lost, the depth that weeklies have lost, and the sophistication that magazines have forgotten.” I hope that other newspapers can start to adapt in a similar way.

Above is a link to a TED talk video featuring newspaper designer Jacek Utko. In the video, Utko talks about how, as we hear almost every day, “newspapers are dying.” And he explains that in today’s world, it should come as no surprise, because they’re an impractical form of transmitting information. Furthermore, many of them lack the visual appeal that magazines, websites and iPads can boast.

In response, Utko decided it was time to rethink newspaper design altogether. He wanted readers to be able to connect with the content through the paper’s visual appeal. Utko wanted to prove that graphic designers had the power to save newspapers.

And he did just that. Utko began redesigning a number of central and eastern European newspapers that had seen significant declines in readership. He started by redesigning the covers. “My approach was very artistic…I wanted to make posters. Not newspapers, not even magazines. Posters. We were experimenting with type, illustration, and photos. And we had fun.” Not only did the redesigned newspapers begin winning awards, but they also saw a significant increase in sales. Here are some examples: 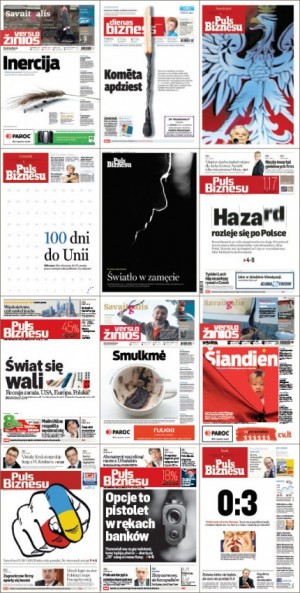 Utko said that it wasn’t just design that led to such success, but his policy of combining form and function. “The change that we made was not about improving the look, but improving the product completely.” If it’s done right, design and written content should work together to attract readers. This goes along with the earlier part of my post, about how “i” is designed with a completely new mindset. It shows that the power of design is something that should really be taken seriously and used to it’s full potential.