The New York Times website is one that similarly matches its print style–simple, basic and to the point. There’s not a whole lot of creativity on the site, and I think this is where the site really lacks. For the print version it has arguably worked because it has such a reputation that it doesn’t need to reinvent itself. However, I think when they came into an online presence they could have used that opportunity to perhaps develop a more modern voice and open themselves up to an audience that they generally may not reach.

Looking at their first page the grid structure that they work on you can see is quite similar to their print version–a 6-column format. 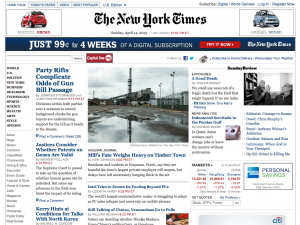 It’s visually pleasing because it doesn’t require your eyes to work to hard. You don’t have to decide where to look first because they focus on the bigger picture right in the center. Much like their print version, most of the stories (save the main one under the photo) are given the same amount of spacial attention. Their use of stroke weights does not vary much, you have about 3 or 4 different hed and body styles that they follow. There is the nameplate, which takes prominence on every webpage, and there are heds (which are a bolder serif at about triple the size of body type), there is byline/timestamp which is roughly the same size as body type and then there is body type, which is also a serif and runs about a size 14 or 15. 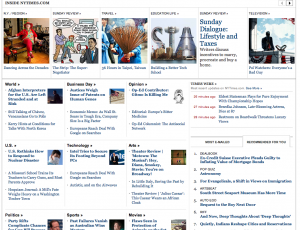 On the other pages you can see that they follow much of the same design styles, however they sit on a 5-column format. In addition, main stories have much more prominence than on the home page–they also seem to have a much stronger visual. The font styles adhere to the same guidelines, with such interactive features as video having a font style just a little bit bigger than the main heds. 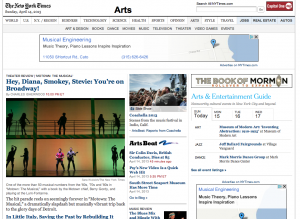 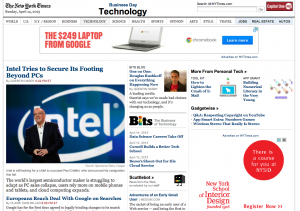 Another thing I think doesn’t work well with their secondary pages, as well as the homepage, is that they put such interactive content like video all the way at the bottom of the page. Even on the homepage, videos can be found about halfway down the page. For the average user who doesn’t stay on a page very long, NY Times is missing out on maximizing their content by pushing it out of view. I think videos as well as scroll-through content should be featured more prominently. 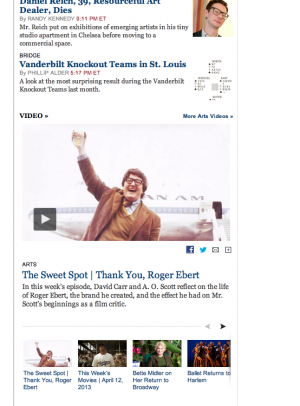 Overall the NY Times is sticking to what’s familiar–and while it may have worked when they first began their internet presence–in an age where websites are the medium for companies to experiment with creativity and attract new audiences, the NY Times is falling behind.