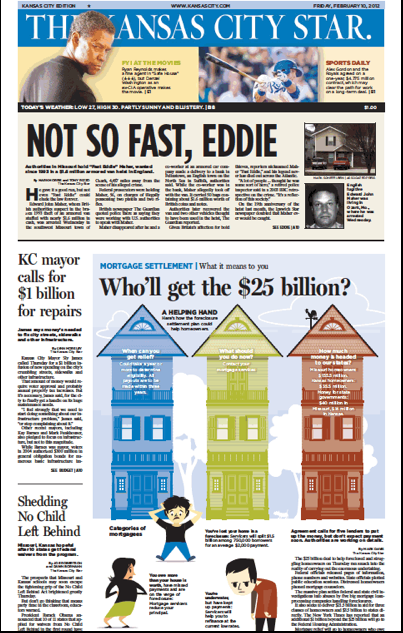 The Kansas City Star is a daily newspaper that runs on broadsheet. That means it’s the long, vertical pages that are a little bulky and fold in the middle. It’s size actually shrunk some in 2006, though, when the now-defunct Knight Ridder purchased the paper. It measures to be 21.5 inches by 12 inches now, and it used to be 22.75 by 15.

The paper seems to work on a six-column grid, although you will never see six columns of text on the A1. The cover of the paper seems to have thicker columns and most of the time works off five columns. 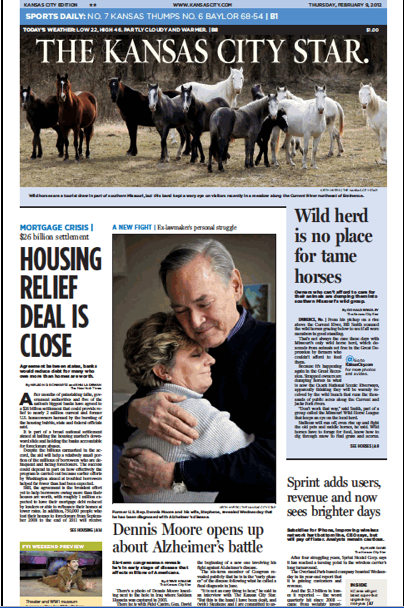 The KC Star uses a modular design and makes sure there’s emphasis to distinguish separate stories and topics from each other. The paper uses screens often to pull a story out, especially on the front page. And the paper allows itself to be innovative with a unique front page. There’s always a screen or box of some sort on the front page, something that isn’t always seen at other papers. It’s meant to draw a reader in with tease photos above the fold almost always, and a box or a graphic to go with the A1, along with a screen on one of the stories. As you can see in Thursday’s cover, the flag is pulled into the A1 story using a photo and a screen to draw it all together. It’s kind of an awkward shape to connect the story to the photo, but it’s certainly trying something different.

Photos are a huge part of what comprises the front page. There is almost always multiple photos, with one being dominant enough to serve as the primary point of entry. As said, there’s also usually a screen on one of the stories, or a graphic box. And there are promos both at the top of the page and somewhere else on the page, usually with photos of their own.

Information is organized beginning with the headlines. That’s where the organization and hierarchy starts. The main story will have a mac head in all caps. Sometimes, the secondary story will have a screen behind it, but the all-caps mac head is meant to draw more attention. It’s interesting to see the weights of typefaces dictate what stories should be read first and if there is too much competition for the eyes on the front page between design elements. 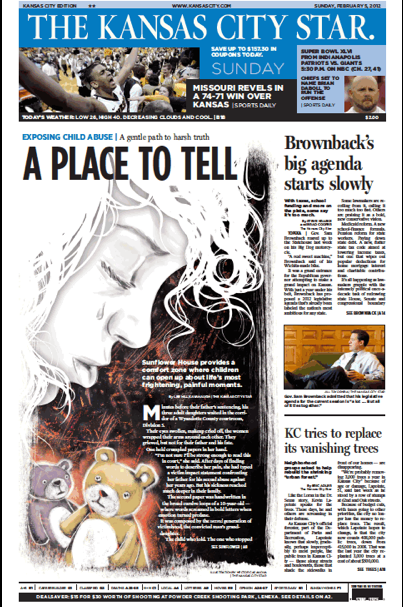 The front page gives off a tone that there’s always going to be hard news that is very important and pertinent, but there’s also going to be something well written and provocative. The Kansas City Star seems to do a good job of mixing up its content on the front page. There’s almost always the main breaking news story of the day combined with a solid enterprise story. Sometimes, the enterprise takes precedent with the all caps mac. Other times, it’s the breaking news.

Photos play as big a role as any element on the cover. There’s intriguing tease photos to go along with the short promos to get you to turn the page. There is always strong A1 art — I think this is what the paper does best. If they don’t have a great photo, they make it work with an interesting illustration or graphic. There are definitely some critical thinkers when it comes to figuring out what visuals should be on the front page, because they usually execute it well.

From issue to issue, the screens and typefaces keep the consistency. There’s the same hierarchy in every paper, even if the visuals are different and the organization is different. I think having a flag with such a jarring blue background on white text also leads to consistency because it’s a unique flag in the scheme of daily newspapers.