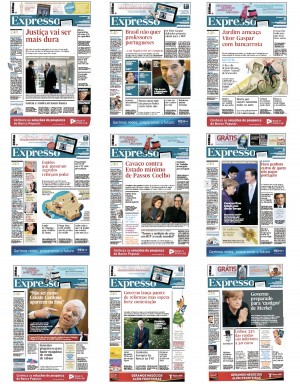 Expresso is a Portuguese weekly newspaper that was founded in 1973. The layout of Expresso began as Broadsheet but decreased to Berlinger in September 2006. It still remains as  the Berlinger format today. Expresso has a circulation of 100,000 and a readership of around 600,000.

The look of Expresso is very clean, fresh and easy to navigate. It has concise serif typography and a clean 6-column grid that is consistent with every issue. It has a sort of business feel, but that feeling is lessened by its varying colors and images that make it more playful. It has a modular layout on every page – although the rectangular text boxes do vary in size. The nameplate remains stationary in every cover. It uses the design element of a reverse : white text with a dark background. The nameplate is always positioned in the same upper right hand side. The dark blue rectangular background extends across the width of the newspaper. Within the blue rectangle also resides the folio. The folio is right-aligned, positioned neatly within in. This folio is unique in that it is not the standard one line text positioned at the very top of the newspaper.It also includes links to its online and social media.

The primary colors of Expresso include dark blue and red. The secondary colors include variations of CMYK. The red text is used for the A1 stories and most important headlines. The dark blue text is always used as part of the nameplate and as headlines for the “24h” side stories on the left hand side column. The secondary colors are often used to highlight other less important stories, create boxes and create contrast to the black text around it.

The hierarchy of the front page goes as follows: First – The main image/photograph which is positioned mainly in the center of the page. It is interested that the main image is not always positioned above the fold of the newspaper. In some pages, the A1 headline is positioned above the fold is bold, red text with the image below it. Next – my eye goes to the nameplate and the advertisements on both the top and bottom section. I personally think that the bottom strip advertisement (which is present on every front page of the Expresso) is competing too much with the nameplate and the rest of the newspaper. Since it is only an ad and is most likely considered the least important aspect on the front page, it should not have so much contrast as to see that my eye is going there before reading the text on the page. Next – my eye goes to the A1 red text headline and then the surrounding text and secondary images.

Two design aspects that I think the Expresso uses very well are rules and cutouts.

Rules: Perhaps not very noticeable at a first glance, the rules have several varying widths. The varying widths I think allow for an easier read between the different sections. In certain situation, it seems that the widths of the rules go from thicker to thinner, depending on the important of the story. The rules also seem to give the front cover a unique hierarchy of where they want the reader to look first. It is loosely separated into three sections – the main, middle, and largest section that contains the A1 and largest image/photo, and then the two secondary columns located on either side of the main column.

Cutouts: Cutouts are definitely a great way to attract the reader and get their attention. In every issue, at least one cutout is used above the nameplate to highlight a specific advertisement. These specific cutouts also cover part of the nameplate which is different than many other newspaper designs. This reminds me of all the famous fashion magazines that have cutout images covering almost all of the nameplate. Does that mean they are so well known that their readers automatically know which magazine it is due to its popularity? There are also smaller cutouts positioned uniquely inside the front cover that give it more color and interest to look at.