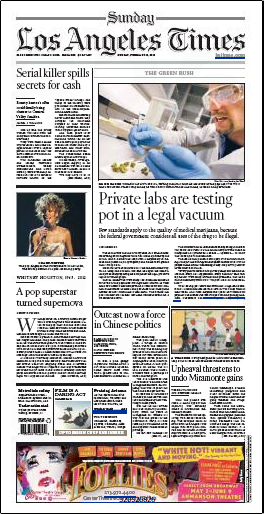 The Los Angeles times takes the shape of a typical broadsheet format. It is an ode to the older newspaper era with huge newspapers that are a task to fold and not easily stored for on-the-go readers.Broadsheet, 21-22” by 12-13” spread.

The grid format used for the Los Angeles Times is a 6-column grid. On occasion the publication will be set on a 5 column grid. This is usually when there is some kind of large photograph accompanying the headline story (but even then the grid may still be six).

A modular layout is a design system that views a page as a stack of rectangles. The Los Angeles times stays clean and precise with a rectangular modular format. An ad or ads typically align along he bottom of the front page and are clearly adhering to a rectangle shape.

The front cover is supposed to draw the reader in with great photographs and story telling. From the looks of a Los Angeles Times front page you a reader would not suspect the fate of newspapers is being plagued by advertisements. Page one of the Times has one ad at the bottom of the page. The rest of the front page is text, maybe with small graphics, but more likely sitting alongside the dominant main story’s photograph. If one were to look inside the paper one will find that there are a considerable amount of ads that take up the side and bottom borders of the paper, subsequently pushing the text towards the interior folds.

On all of the days except the Sunday paper, the Los Angeles Times has the medieval nameplate at the tope center with a gray rule line beneath it. For the Sunday Times, the front page keeps the nameplate but adds the word “Sunday” over top, with a bold rule line on either side. On any front page L.A. Times you will find a couple of bold rule lines to separate stories. Also the folio underneath the nameplate doesn’t change on any of the day’s papers. 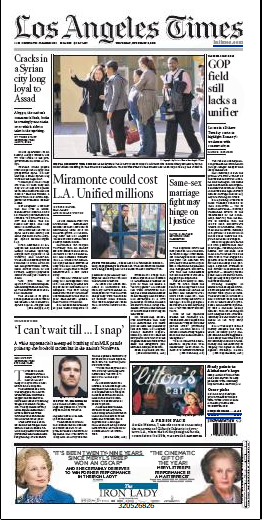 There is a hierarchy of formatting for the front page stories. The most newsworthy story gets the largest photograph (near the top) and the largest excerpt of text, before the jump. Sometimes you will see smaller pictures to accompany the remaining stories as you travel down the page. There is always one ad place at the bottom of the A1, going straight across in a rectangular shape.

I think the tone or “feel” of the front page is serious. I believe the paper wants its readers to see that they care about delivering quality news that is newsworthy. You get this feel because of the lack of ads. The reader isn’t given the impression that the news in the paper is being bought by advertisers (at least not until they open the paper). It can also be said the feel is at times old-fashioned because of the fact that there is usually more text than visual ( and as we saw at SND, papers are moving well-beyond the limitations of  text-heavy publications).

Occasionally there will be an analytic graphic or small headshot/photograph to sit with a smaller story on A1, but the front cover isn’t boosted with visuals. The nameplate remains the same. There are no ads or graphics that appear anywhere near the top of the page of A1, they are always at the bottom. The front page is text heavy, set off by a typical main picture and