Unlike newspapers, it is hard to define what pattern Mother Jones divides its first page into columns, since it is a magazine. Mother Jones comes out every two month and displays new design. The magazine’s every issue tends to contain a large size of background picture and also a large font size of nameplates with various colors on its cover. The nameplate is always placed on the top of the page and the cover lines always depend on a size and place of the background picture. The dimensions of Mother Jones are 8.45 inches by 11.75 inches, which is almost same as Time. 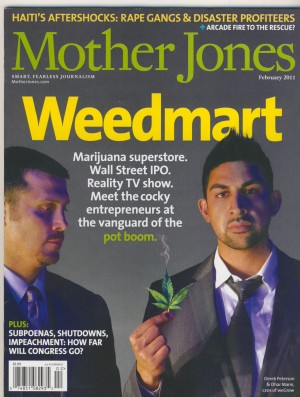 Because Mother Jones does not use a certain grid format, it displays a non-modular design. Based on the definition of a modular design, stories are displayed in rectangular shapes, which allow well-ordered pages. However, on most of Mother Jones’s cover pages, we can see the magazine tends to display one or two cover stories with a large photo on its cover page. So, for example, for the February issue shown above, beside the nameplate, we see Mother Jones places its cover story (weedmart) between two men in the background picture.

Also, based on the magazine’s back issues, Mother Jones tends to be heavily text-based, since it usually displays only one or two cover lines on its first page. Even though Mother Jones’s cover page is heavily text-based, it doesn’t seem strict or squeezing like newspapers because the magazine doesn’t display many materials on its cover. Most of Mother Jones’s cover pages seem to be clean and simple. The background photo always reflects the cover story of every issue of the magazine, and a clear space between the background photo and cover lines makes it easy to read. Plus, the reserve technique makes the nameplate and cover story stand out more. 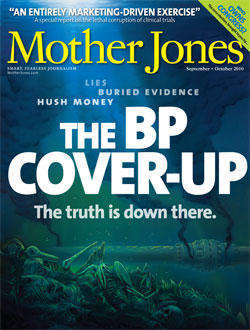 I think the purpose of the first page of magazines is showing readers the personality of a magazine. So, I believe that a successful magazine (and its cover) could be able defined only by its flag, which means choice of typeface and its size and color is the most important thing that a magazine should be concerned. Also, the magazine uses different typefaces for the flag and story lines, so they look definitely distinguishable.  However, sometimes the font sizes of the flag and story lines are similar, so it makes readers little confused to see the flag. I think the Mother Jones should make a clear difference in size of typeface between its nameplate and cover lines. Beside the font size issue, the overall cover page design looks simple and well-organized, reflecting as it is a news magazine. 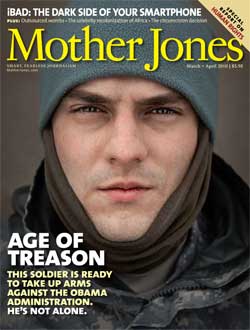 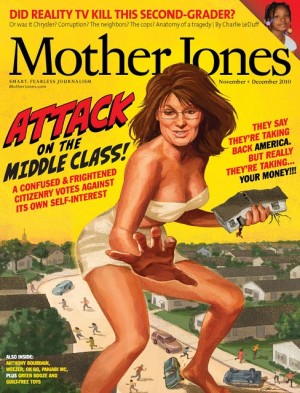 I’m not sure about the magazine’s consistency, which is maintained from issue to issue. Mother Jones always displays the nameplate on the top of page and every different background photo. The magazine mostly uses images of people and cartoons. Sometimes, information graphics are used. So, based on the pattern of images the magazine uses, I think Mother Jones has a consistency on its cover page. However, since it doesn’t use a grid system, which allows the magazine to use various layout skills on its cover page, every issue of Mother Jones seems to be new and fresh with different designs.