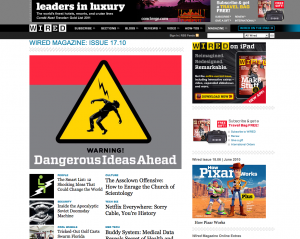 Wired.com has an overall look that really fits the print publication. It is bold, masculine and has a block pattern feel to it. The first thing I realized was the use of the same design elements in the navigation bar as in the magazine. The arrows used to separate the different website categories were the same ones used in the section headers of the print version. This made me feel a connection to the website as if I had already been here, it felt familiar.

As in the print version, the same colors were used continuously, mostly black and white with other colors for small emphasis or highlighting effect. All of the stories were in black type and a light blue type was used to highlight the links or new sections. 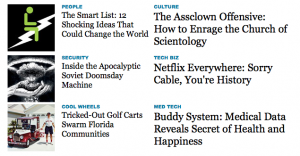 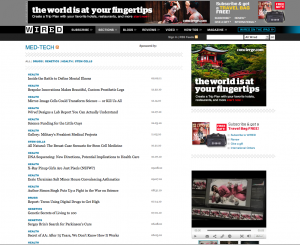 As in the print publication too, the use of images isn’t prevalent on the website. On a second tier page, it was all type with two ads and a video as the only visual elements. Wired.com relies on the use of clean bold type of convey their overall feel. I wanted to see how they treated their stories to see if there was a difference in presentation and found that it also f0llowed the same lines that the magazine does. Instead of using photographs, the website relies heavily on graphic illustrations. As the photo shown below, in order to paint the picture of a health story, the edition uses a creative illustration. Since this was a story featured in the magazine I have a feeling this was probably the same element used in print. 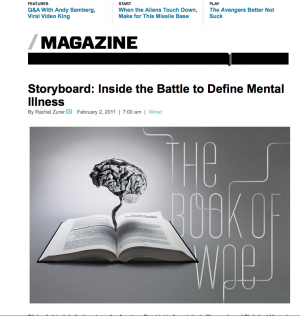 Wired uses videos on in the web extras section of their design, on the right hand side. They do not have specific videos with certain stories, just all the same reel of videos that show up in the same spot for every page. I didn’t like this concept, I felt that it made the videos seem cheap, and not important. It would make more sense if they had them categorized with the specific stories. That way the viewer would only have videos that they would be interested in watching depending on topic.

After exploring the website for a while it I stumbled upon a section devoted to videos. It wasn’t well advertised as to where it was, and I felt it was hidden. This needs to be a better feature. 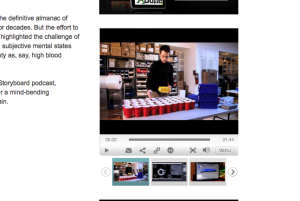 The overall grid and design used for the website is very simple and easy to navigate. Having the navigation bar running the full length of the page gives the website enough room to allow one main news content section and two side menus that remain constant. This allows the elements to remain similar throughout the site.

Overall I wasn’t too impressed with the website. It fit, it matched, it felt like the print edition, but there was nothing special that would draw me into the sight if I was an avid Wired reader.