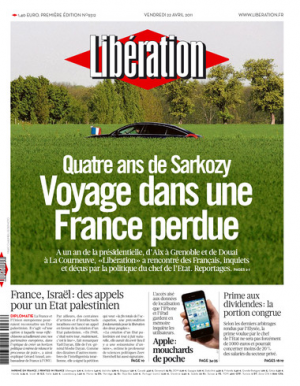 Over the course of the semester, my affinity for European newspapers has grown gradually through attending SND and analyzing Libération.

The publication is both informative and aesthetically pleasing. What I love the most about Libération is its clean look. Traditional newspapers tend to be really crowded with text and photos all over the place, overwhelming the readers with so much content in so little space. Libération, on the other hand, effectively uses white space on the pages. But this does not mean that the publication is light on content. In general, there is a nice balance between content (words and photography) and white space.

Furthermore, Libération uses simple words that are straightforward, conversational and personal. The section names are clear – Evenement (Event), Monde (World), Economie (Economy), Sports and Culture. Certain headlines and decks are in question form, which engage the readers. Also, there is a section named Vous (You), which makes the publication more personal. As for the typography, the publication utilizes both serif and sans serif typefaces to create a nice balance on the page.

In addition, photography is a main design element of the publication, and its work is worthy of noting. Libération includes various shots, such as wide angle, close-up, as well as perspective shots. All of them are in different sizes, adding more variety to the pages. Every now and then, it also includes illustration. Overall, both the photos and illustration are very compelling. Images are placed always on the top half of the page, which immediately grabs the reader’s attention and leads them reading the stories. In addition, it is also important to note that the colors of the photos complement the main colors of the publication (red, black and white), as well as other section colors, which include aqua blue and magenta.

Color is another major design element that Libération effectively utilizes. The publication uses colors for hierarchy and to highlight something. In addition, it uses vibrant colors, such as aqua blue and magenta, in which traditional newspapers do not usually use. Thus, this characterizes that the personality of the publication is modern and fresh, which can appeal to a broader audience.

Now that I have talked about all the great things Libération has been doing, I would have to say that my least favorite part of the publication is the A1, including the nameplate. Overall, the nameplate’s red diamond along with the white text with black outlines is iconic. The red diamond is also used in the folios, and it immediately tells the reader what publication it is. I initially liked the nameplate and thought it was simple yet powerful. However, as I spent more time analyzing the inside pages, I began to dislike it. The main reason is that compared to other design elements of the publication, it seems weak and even a bit complicated, since all the other inside pages are so simple and clean. Furthermore, the A1 usually includes just a single dominant photo or a dominant photo along with smaller photos. I personally would like to see more content on the A1.

Another thing to note is that Libération is not always consistent with the number of columns for every article, which usually ranges from 4 to 6. The publication effectively does it so that it’s not too confusing for the readers, but I think it would be better if it changed columns less frequently.

Overall, Libération has a very modern and clean look (typical of European newspapers) which is why I’m in love with it! I’ve been inspired a lot by the publication throughout the semester. I also learned through analyzing Libération that news design doesn’t always have to adhere to the traditional format. There’s definitely room for creativity, which can make today’s newspapers more engaging and aesthetically pleasing to the readers.