The trip to Cazenovia provided a lot of insight in what community members want in a quality local newspaper. Although the small town terrified me, I can tell it is a very close-knit and friendly area to live in. The members of the panel were diverse in terms of their experiences with Cazenovia and lifestyle. I think the best asset to the panel was Chief Michael. He clearly knows what goes around in the community from crime to school plays. It was also great hearing from those who grew up and lived in Cazenovia for years, and from those who just recently moved in. The one topic that was consistently mentioned was the presence and importance of family, especially children. Cazenovia is clearly an area full of families with young children, thus the community is naturally interested in knowing what goes on in schools, what events around the community that can gather families together, and essentially, places where people in the neighborhood can have fun.

I think the problem is that many community members have no idea what Cazenovia has to offer. When asked what is something the newspapers in Cazenovia is missing, many of the panelist said that it poorly represents Cazenovia events. Like Chris mentioned, newspapers need to be proactive, not reactive. Writing a review for an event is useless, a paper needs to be able to report upcoming events.

We spoke about this during lunch, but I really think it is unacceptable that only one or two people produces the Cazenovia Republican. That’s just ridiculous. There needs to be people in the neighborhood who can take action and join the team. There is no way any paper is going to be successful with little manpower. And I’m not talking about permanent staff, but there is a lack of writers as well.

I grabbed an issue of the Cazenovia Republican and there are a lot things I would like to point: 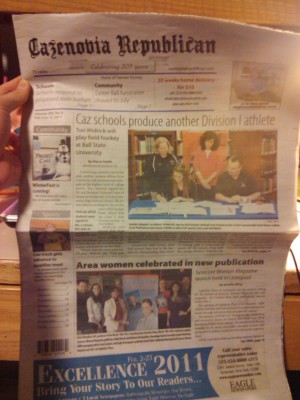 Chris and I agree that this looks like The Daily Orange, but worse. Whatever that “Excellence 2011” thing is, it’s taking way too much space on the front page. And as for the nameplate…. 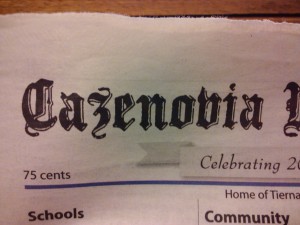 Chris said, “It looks like a JPEG.” And seriously, it looks like a JPEG. I don’t mind so much that it is medieval-looking, what bothers me most is that not only are the photos blurry (which makes sense — bad photographer), but why in the world is the wordmark so blurry?? It looks like someone from the stone age took a rock and smashed some dark plants together to make black ink and they used a really old printing machine to type these letters out. It’s just so bad and old…I would not want to read this paper. 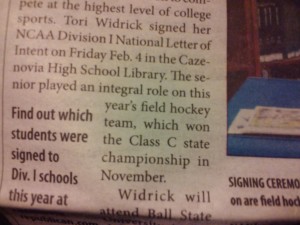 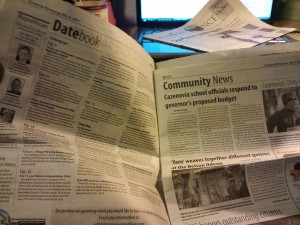 If you look to the left side of the paper, you’ll see three faces. One of them is the editor, the others I don’t care about because they’re in charge of advertisements. OK, not good. Also, to the left are blocks of text showing upcoming events. OK, not good. Why would anyone want to read that if it’s all bunch up onto one page. Boring. The news layout on the right is not bad, but it is definitely not good. I wish there were pull-quotes. The image on the top to the right has some kind of really long caption that really distracts me from reading the actual story on the left. 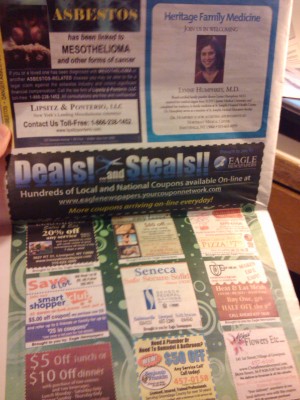 The back of the paper is filled with coupons. This is the only good thing going on in the newspaper.

I don’t know. I think we need a major overhaul. Quick. I can’t wait to discuss creating a prototype for Cazenovia. It’s going to be great!

Intended audience: The Cazenovia panel all have one thing in common: strong familial relationships. More than half the panel mentioned that the Cazenovia Republican focused a lot on students in athletic sports leagues–it is not to say they did not like this. But after taking a look at the Republican myself, I thought it focused too much on its children’s sports leagues. So, although a paper focused on the younger community members, I think there should be a balance of what the older community members would be interested in knowing in regards to the environment of Cazenovia and what it and its inhabitants have to offer. The intended audience would be those between 30 to 60 years old. I chose this range because

1. There are new families who have moved into Cazenovia; and I suspect that given the popularity of Cazenovia, there will be more new families moving in in the near future. One of the panelist said she moved in not too long ago and have two younger children. Also, that woman (her name slips my mind at the moment) also owns a restaurant not too far from where the panel was held. This also implies that those around her age are at the prime of their careers. Another point worth noting while creating the prototype.

2. Any where in between 30 to 60 are those parents who have children applying to high schools or even college. We need to also cater to this demographic as they need something to do once their children are away from home/hardly ever home. Those in this demographic may still be at the prime of their careers, too. Anything related to their field of occupation may catch their interest. This is also during a time when their children are probably very rebellious–maybe parenting tips can be included in my publication.

**As a side note, I think having at least one one spread dedicated to a younger adult audience will be a great asset. Say, I can create a “the college application process” in one issue or “latest trends” in another issue.**

3. At age 60 or so, when they finally retired, that is when a newspaper/weekly magazine is helpful in announcing any events worth getting out of the house for. When you’re retired, your children will have (or not) moved out already, which means you’re going to be bored. I think this is also the beauty of a weekly magazine — not only will I be able to feature community news and events, but I can have a section on, say, “home DIYs.”

Why do they go to a paper? Chief Michael said he reads his papers in the morning because he is too busy during the day and night working. The journalism professor (sorry, his name slips my mind) also said he preferred reading the paper with his breakfast. Others have mentioned that they only read the paper once a week because they are too busy otherwise, while one mentioned she thoroughly reads The Post-Standard on the weekend. I think the consensus of the “why” is that the people in the community want to be able to learn about Cazenovia, keep up with current events in Cazenovia, and occasionally read up on news surround the Cazenovia area. We did mention about the localization of global news, and that seem to catch one of the panelist’s attention instantly. She is, of course, a professor at the Maxwell School, so learning about the world outside of Cazenovia came naturally. The others on the panel seemed to be confused or uninterested; I recall many of them making a sour/confused face when I asked if they would care to read about global/world news. I think having “glocal” stories will be a great way to combine both because I want the people of the community to learn about the world outside of Cazenovia– many of them seem to want to be sheltered in Caze, I don’t agree that is reasonable.

They also said the Republican looks, well, not attractive. And I’m talking about the layout as well as the photos. Naturally, the visual journalism is a key factor into why people reach for a newspaper/magazine in the first place. That said, we need to create something that is visually appealing that speaks to the community. I’m thinking landscapes, important community faces, and children.

What do they want out of it? People in the community will go to a paper for quick, but well-researched and thorough, reads about what’s going on with their children’s schools, events in town, projects to do at home or with a community, and glocal news — but they will go to a paper only when they have time. Brief stories and weekly publications it is.

When and Where do they read the news? The worst thing I heard during the panel was that if they didn’t have time to read the newspaper or didn’t have access to a quality paper, they would turn on their televisions and watch broadcast news instead; it broke my heart. I remember a panelist said that reading the paper is a luxury. When she has time on the weekend, she will sit and read the whole Post-Standard. This is great. We know that these community members are busy, be it they are at work, or they are spending time with family. We can narrow a publication down to a weekly circulation and I am hoping it will be on stands by early morning. This way, they can take it with them and enjoy reading the publication throughout the day. They read it during meals, on their way to work, and when they have time before bed.

Final Thoughts: I am really excited to say that I will be producing a magazine prototype for the community members of Cazenovia. I feel like these people are too busy to have a paper in their hands all day (the ink will be messy and the thin sheets will rip). I think the community members want something that is tangible and something they can keep for over a week so they can look back at it if they need to read an article about, for example, a review and entree suggestions of the new reopening of a restaurant down the street. I also want to be able to include articles in this magazine that will withstand time; for example, an article about how to help your child prepare for the SATs or some sort. I just think a newspaper will just wash away atop other piles of papers. A magazine will be a great fit for the community members. I think about all the great outdoors activities they can enjoy, the places they can visit, the events they can attend, and all i can see is them holding a magazine to refer back to incase they get lost or in case they want tips on what to do in a recreational facility. You can’t do that with a newspaper, it gets too messy.