The Kansas City Star uses color more often and liberally than broadsheets in other cities. It’s the first thing that catches the eye when looking at A1 – the nameplate. It usually uses 3 – 5 colors, including around the actual name of the newspaper, which is not common. The skyboxes use large, colorful pictures as well. It’s the introduction needed to a paper that isn’t shy to use colors to enhance design and signify the reader to what he or she is reading.

In fact, look in these skyboxes. Not only are they attached to the colorful nameplate, but the text for each article is colored according to section. The headers use the same color the Sports and FYI sections use in their nameplates. More on that later.

The KC Star uses color often, but the paper does not take the look of a coloring book or supermarket catalog. Though color is used often, it’s restrained enough to remain professional. This can be seen in the sidebars and teasers, which use a variety of shades but in a sleek, dignified way.

The sections all use different colors to signify their own identity. If the A1 section has a story that will eventually direct you to the Sports section, for instance, it will use red font, which is used heavily on the nameplate of the section. The same methods are used for the business and entertainment departments, as well as news. The bugs for columnists use the same color as the section they write for as well. The paper is color coding it’s sections to make it easer for the reader to identify with that type of news. Though it’s trying to give each part of the paper an identity, I do feel it’s a little too much handholding for the reader. 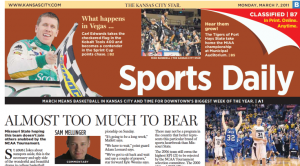 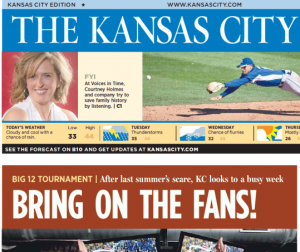 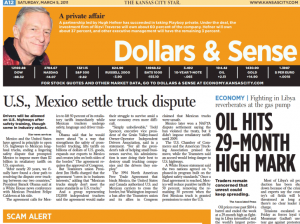 The paper’s mission to be a more modern version of the traditional broadsheet is empathized in its color usage. The Star is not afraid to use color on its A1, the face of the paper, which sets the tone for the rest of the publication. The usage of color, along with the sleek typeface, attempts to give the paper a web page feel, which works well for the most part.