The function of most of these covers seem to invite curiosity. Rather than show images with large landscapes, it seems to show a small part of something much bigger. For example, rather than showing a whole beech, one cover shows the rocks extending out on to a shore. Almost half of the page is the sky. There is a lot of simplicity. Despite this being a travel magazine, one cover hosts a woman sitting at a chair. She holds a drink and has a hat on, which covers out of her face. She is in the shadows, and most of the cover is in black. There is a lot of mystery here. This works because it invites curiosity and reason to want to look inside the magazine. The food issue is simple, as well. It is all white with one white plate of plain noodles. The small detail that stands out here is that the noodles are pink. There seems to be a theme of simplicity, with a quirk that invites curiosity.

The “Condé Nast Traveler” name plate is interesting. It is almost always white, except for on the 30th anniversary issue. “Condé Nast” is smaller, while “Traveler” is bigger underneath it, perhaps because the former is the publisher name, and the “Traveler” part is the one that the publication wishes to highlight. Written in small type to the left of “Condé Nast” is “Truth In Travel”.

No inside stories are represented on the cover. Most of the issues have little to no writing on them, so the nameplate is the main focus of the cover. The nameplate is at the very top of the page, and if there is any writing, it is typically  in the center of the page. This writing is usually to dictate a special issue, such as the food issue or the 30th anniversary issue. The publication really seems to rely on strong photography to entice its audience rather than with words.

The Table of Contents is not listed chronologically, but by continent described on each of the pages. It is one page, and very sparse. Most of the page on which the table of contents is, is a large picture. Underneath the table of contents is one or two blurbs about what might make this particular issue special. For example, “2018 Gold List” or “Gift Guide”. The fonts are small, and there is a lot of white space. It looks very clean. The designer seemed to practice a lot of restraint.

The listing of departments and sections part is very simple. Each department is a different region, and this changes in each issue. Sometimes, two regions are combined. For example, one issue combines “Middle East and Africa” in one section. Another issue combines “Caribbean and Mexico”. The latter is in many issues, perhaps because it is a very common travel destination for Americans. 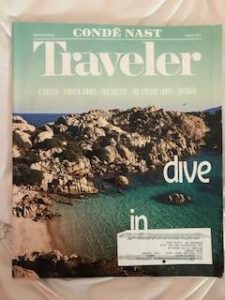 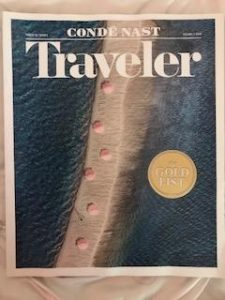 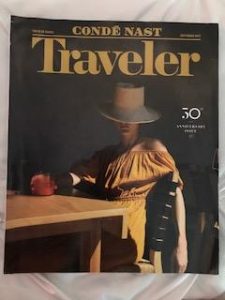 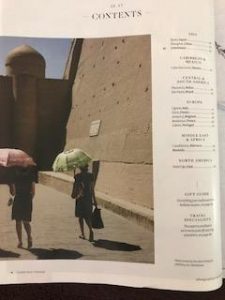 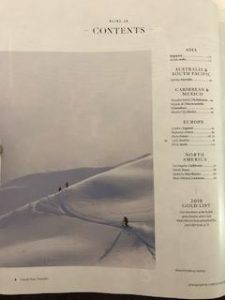