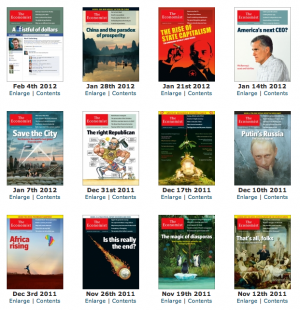 The Economist measures 8 inches by 11 inches and uses glossy paper folded and bound with staples. This format, typical of magazines, sets the publication apart from daily newspapers in two important ways. First, the durability encourages readers to keep issues of The Economist longer than papersnand read through them multiple times. Second, photos are more compelling on the glossy, bright white, heavier stock paper than on newsprint.

The magazine follows its grid closely and employs a predictable structure. It uses a four-column grid for the table of contents and news briefs section. It then switches to a three-column grid, which limits options for photos and text widths. Readers can instantly recognize opinion columns because they are boxed and use two columns.

The Economist’s design is not modular. Stories are not perfect rectangles and often are laid out in irregular shapes; however, screens and rules prevent these shapes from leading to confusion.

The Economist’s cover uses one large image, unlike its pages, which include multiple stories and images. As is the case with most magazines, this image sets the tone for the issue. It lets readers know that the publication focuses on in-depth analysis of a few topics, rather than on breaking news and multiple stories that appeal to a broad audience. The cover images are thoughtful, clever and sometimes humorous. Editors often select photo illustrations that use photo collage techniques, such as a cover that shows the iconic Christ the Redeemer statue shooting into the sky like a rocket accompanied by the headline “Brazil Takes Off.” Other covers showcase political cartoons or illustrations.

The design elements of the cover vary little from issue to issue. The red nameplate remains in the same position. It sits on a screen to the left of promos lines for five stories and above the date and the publication’s website. A large type headline in a sans-serif font complements the main cover image. It can be black, white or a color pulled from the image and is typically short and punchy. Sometimes, the headline is a play on word. Occasionally, a promo is stripped across the top of the cover to advertise a special section or report.

The cover uses color, placement, and size of elements to create a clear hierarchy. The red color draws attention to The Economist’s nameplate, emphasizing the importance of the publication’s brand. Yellow is used for promos stripped across the top of the publication, as it comes forward more than other colors. Although the promos are near the top of the page, the larger size of the cover headline draws viewers’ eyes to it before the promos. The placement of the flag and promos is visible even when half the cover is obscured on a newsstand.

Overall, The Economist maintains a thoughtful, analytical tone through its design from issue to issue. Even humorous illustrations generally require that viewers think critically and consider cultural references in order to understand them. The images and headlines also communicate a clear point of view, unique from other news magazines and newspapers. The design does not stray far from traditional cover layouts for news magazines, establishing The Economist’s credibility as a reliable source of information and analysis for readers unavailable elsewhere.