While there’s a wide variety of weights, point sizes and styles of typography on any given page of El Universal, a closer look reveals that there really aren’t all that many typefaces being used. Most of the typefaces are serifs, but there is at least one sans serif typeface in the mix.

The biggest, most bold headline is set in what I believe to be a typeface called Foral Pro. This is not confirmed, but after putting an image of the typography into the What The Font section on myfonts.com, Foral Pro appeared to be a perfect match in my eyes. It’s also used in the see lines. If the bylines are not also in Foral Pro, they’re set in something quite similar.

Every day, the biggest story’s headline is set in the same way, and the typeface seems appropriate for the job. It’s incredibly strong, especially in the bold font weight and large point size, but it also is a slab serif typeface with very little variation in stroke width within characters (unlike a typeface such as Didot, which has an incredibly high variation in stroke width). The constant stroke width throughout the entire character conveys consistency, and with the slab serifs, the typeface represents stability. These two traits are excellent traits for a news headline, because they help the reader trust the story and its facts.

The same typeface is also used in the promos, in bold and less-bold weights, and smaller point sizes.

Here are images of Foral Pro being used in some of the above-mentioed ways: 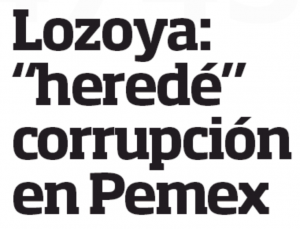 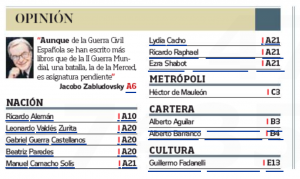 Another typeface that El Universal uses is Prensa (also not confirmed, but a seemingly perfect match on myfonts.com), which is used in the other headlines and the deks. While this typeface has higher contrast in the stroke widths between various parts of the letters, it still maintains a feeling of stability because the serifs resemble the slab serifs of Foral Pro. However, letters like c and r, for example, display a very different kind of terminal that appears to expand, adding a bit of weight to the letterform, as well as a bit of flavor. Because of the varying stroke widths, the terminals and the slab serifs all contained together, the typeface feels playful, in a way, all while maintaining an appropriate level of formality. It’s used in a number of different sizes, varying by story hierarchy, and is used smaller yet in the deks.

I could not pinpoint the body copy typeface, but it appears to be something that shares the qualities of both Foral Pro and Prensa — it’s not quite as powerful as Foral Pro, but it has less playfulness than Prensa. The stroke width variation within characters is minimal, but there is an observable difference within the letterforms. The typeface also seems to mimic some of the slab serifs as well as some of the terminals in the above-mentioned typefaces, but does appear to be something slightly different. It’s readable and legible, which are both of the utmost importance in selecting a typeface for body copy. The leading does feel a little tight, though, and I’d be curious to see how the page looked if the leading were loosened up by a couple points.

Here’s the body copy with a drop cap. The byline is included too:

The sans serif typeface comes into play in the cutlines. It’s clean and easy to read, and I almost wish it appeared on the page more often. It feels like it doesn’t have enough of a role, but I know that it does have a huge role even its limited use, because without it, I’d really need it. The sans serif typeface complements the other serifs on the page in a very desirable and necessary way.

Overall, I think the typography in El Universal feels very hard-hitting, but the impeccable use of font weight variation helps to balance the page and keep it from feeling overpowering. There’s a TON of color on the page, even where no actual colors are being used. (The headlines, deks, drop caps, body copy, bylines and see lines all feel incredibly distinct, but they’re all set in black and all related.) There’s a great deal of thin-weight typography on the page, and without that, the slab serif style would feel too commanding. The typography feels both traditional and modern at the same time, which is a little bizarre, but a pretty neat achievement. It’s almost up to the reader to decide if the page looks like a traditional or modern newspaper — well, at least I’m still undecided about it.

Here’s a full page for reference: 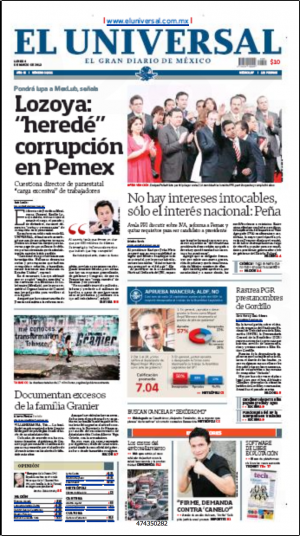