The furniture in Entertainment Weekly, just like the tone of the rest of the magazine is eye-catching. 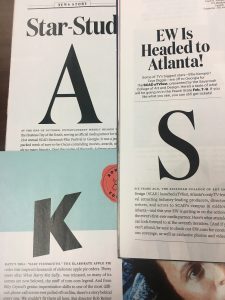 Folio: The folio of Entertainment Weekly always ends with the name of the issue such as Special Oscar Guide, Rom-Com Special Issue,  Entertainers of the Year. For their weekly publications it is usually the date it was published like November 16, 2018.  No matter what though after the date or title of that specific issue right after the title of the issue the magazine EW.COM is always before the bold page number. 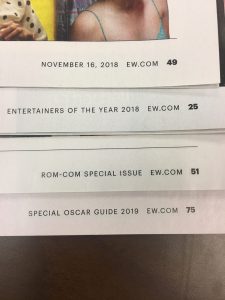 Section Ending: After going through the sections I realized that each review of the book, movie, tv show, or song usually ended with a grade on what the critic thought about it overall. The letter was always in the same color as the section it was categorized. The magazine also did this for film reviews overall that were in theaters at the time, keeping consistency with the color for letter grade. 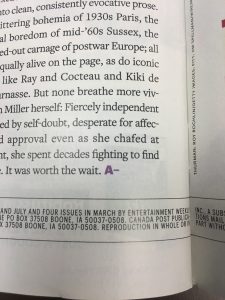 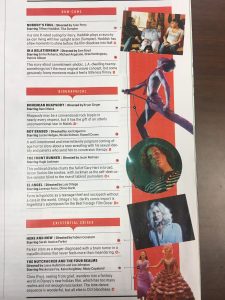 Word Reviews: I also noticed that while some sections did not have the space for the full review Entertainment Weekly still included these reviews at the bottom of the page and they were always highlighted in yellow, bold and usually included a picture from the cast unless it was a review for a book. In every title of this short review is the number of words used. 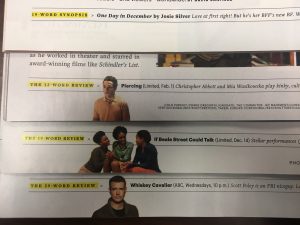 The Stack: For each issue in the Must List in the Front of the Book was usually a list of four items that went with the issue or with that specific issue, and it was always in the top left corner. And repeats the colors blue, yellow, orange, and red in that specific order for every issue. 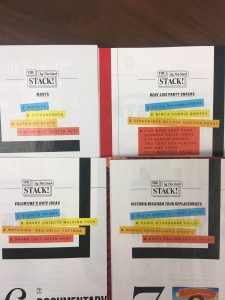 Bylines and Credits: After looking at the bylines and credits, I noticed that usually there is a small paragraph discussing the movies before giving the authors name. The font varies between Century Expanded and Scout Bold. 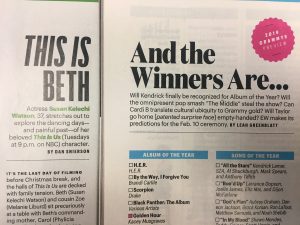 Conclusion: After looking through various issues of Entertainment Weekly I realized that a lot of through and consistency goes into their furniture. Even with these elements they still add to the magazine’s voice, and feel. Like the rest of the magazine their furniture is loud, bright and bold, but still remain small enough to make sure not to take away from the actual content.