1 – Nameplate:
The nameplate is the graphical display of the name of the publication. In the case of ESPN The Magazine, the nameplate is the same as the ESPN network logo. On the magazine cover though, it is displayed in “banner-head” form. It is big, bold, and sets a tone for the rest of the magazine. ESPN is a prominent name (probably the prominent name) in the sporting world, so there was no need to come up with some crazy name for the magazine. 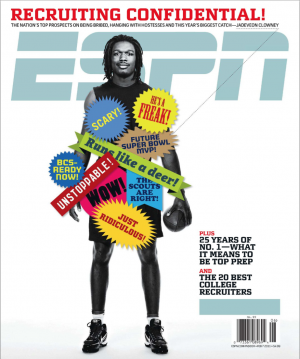 2 – Sidebar:
A sidebar is a small story that accompanies the main story, and can also be used as another point of entry. Graphs, charts or similar graphical material, as opposed to actual side stories heavily dominated the current issue of ESPN that I went through. However, the one that I did find was separated from the story with a thick black line and was represented by a graphic at the top of the page. Smaller type was also used, and all of these elements together successfully drew my eye to that section. 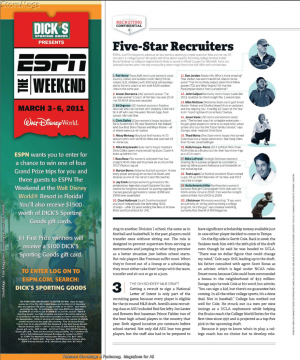 3 – Section Flags:
Section flags are a special label for any regular appearing section or story. ESPN has multiple regular appearing sections, but the section flags are pretty much the same style. The typeface and color of the labels change, but it’s basically a block that has sharp white lines cut through it to reveal sans serif letters. The look is a perfect fit for this magazine that is fun, edgy, and basically the opposite of Sports Illustrated. 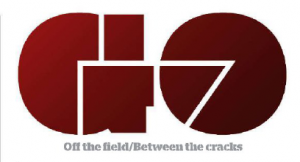 4 – Screens:
A screen is a watered down or opaque background used to provide organization or differentiate concepts. Normally you don’t expect to see a big graphic and a bunch of text covering part of a photograph, but that’s exactly what ESPN did in it’s most recent magazine. The effect drew me into the photograph, and really helped focus the attention on the individuals portrayed … especially with the abundant white space surrounding them in these layouts. 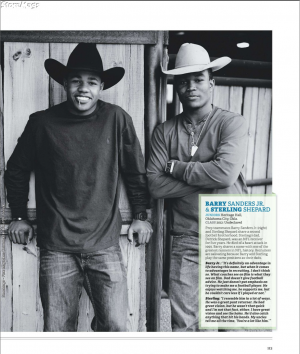 5 – Folio:
The folio is the type at the top or bottom where the name of the publication, the page number, the date and the section are displayed. At first, ESPN seemed pretty generic. The folio had the name of the publication, the date, and the page number. However, once it got past the regularly occurring sections and moved into the in-depth articles, all but the page number disappeared. Instead, a pair of double one-point lines was placed at the top and bottom of the layout, signifying that this was a feature article. I wonder if they are just separating the type of article your reading, or if they’re trying to give more emphasis to the in-depth stuff by removing other information.

6 – Wraps/Skews:
Wraps and skews are used to wrap text around graphic elements and photos.  Both photos and graphical elements are set apart from the text by a lot of white space. Maybe it just seems like a lot to me, as I’m not as familiar with magazine design. I like it. One thing that does stand out to me, is that rather than have the caption for the photo run the length of the photo, they’ve made the caption into a box that is maybe a quarter of the length of the photo, but goes deeper into the article text. This leaves a good inch of white space in some places between the side of the photo with no caption, and where the text is pushed down to. It’s something I haven’t seen before. 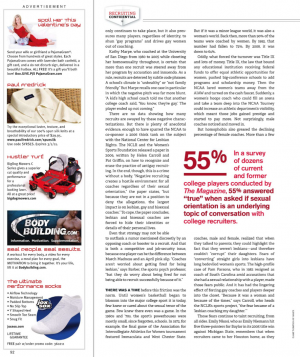 7 – Pull Quotes:
A pull quote is the graphic treatment of quotes pulled from a story. Graphically, the pull quotes were treated very similar to photos and other graphic elements in a story. They were allotted a lot of white space to set them apart. Also, along with being colorful text, the pull quotes often had multiple shades of a color used in order to highlight a specific part of the quote. I though the different shades used really added to the draw of the pull quotes.

8 – Bylines/Credit lines:
A byline lets the reader know who wrote the story, and the credit line lets the reader know who took a photo or authored an illustration. If the article was a big feature story, the writer, photographer and illustrator were all named on the cover page of that article. However, for smaller sections, the credit was often just stuck in the seam in really small type. I don’t love that method, because nobody wants to turn their magazine sideways and read four point type. 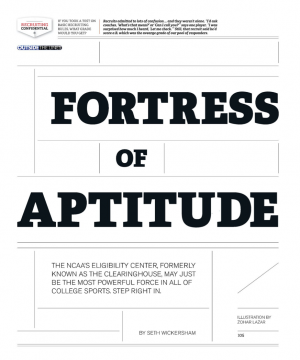 9 – Cutlines:
Cutlines are simply another name for captions. Though I already touched on captions earlier, I’ll revisit them here. Basically, unless the photo appears in one of the main articles, there is no caption in ESPN The Magazine. However, as mentioned above, the cutlines that do appear next to the photos in a story are compressed into square blocks next to the photo. It’s a new concept for me, and for now at least, I like it. 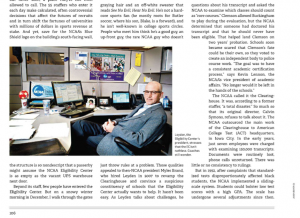 10 ­– Jumplines:
ESPN The Magazine uses no jumplines that I’ve been able to find. A jumpline is simply a notification that the story is jumping to another page. In this magazine, the article simply flows to the next page, so they do not bother with jumplines or continuation lines. I like this setup for the way they do things, if they were to carry an article over to a page that was not the next one over then they’d obviously have to do something different. With the article just going from page to page though, there is no reason to waste the space. 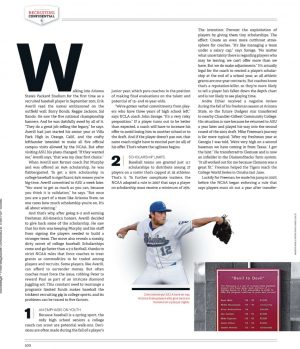