1. Nameplate: A nameplate is the name of the newspaper displayed on A1. Some refer to it as a wordmark, logo or flag.

The design of Libération’s nameplate is simple yet powerful. The bright red diamond-shaped box in the background makes the white letters with black outlines stand out more. The sans serif typeface adds clarity and even a modern look, which are elements of the publication. Moreover, unlike other publications where the nameplate is always found in the same place (usually on the top center of the page), Libération shifts its nameplate at times; it can either be found on the top left, top center or top right of the page. I think this adds visual interest for the readers.

2. Teasers & promos: A teaser/promo is a graphic element on A1 that leads to an item inside the newspaper. It gives a glimpse into the actual story. 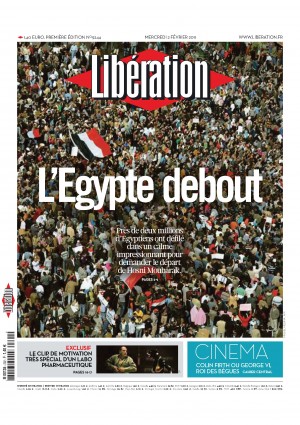 Libération has a layout that is more similar to a magazine than that of a regular newspaper. Thus, unlike other publications that have tiny teasers on the bottom of the paper, Libération usually includes a photo, a phrase or a sentence, along with the page number of where the story is located. I think it is effective that it provides a visual image because it catches the reader’s attention. In the image shown above, it effectively uses boxes in order to separate the different stories, so that the readers can easily distinguish them. Furthermore, Libération does a great job in using colors to create a nice balance. (Note: The dominant image of this front page is also an example of a reverse.) 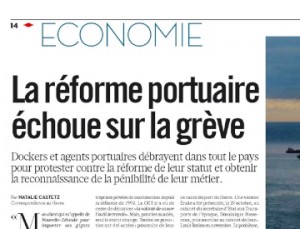 Libération uses various colors – red, aqua blue, magenta – to separate different sections. They are usually located on the top left corner of the page. The sans serif typeface and the use of capital letters make it easy for the readers to locate where they are. It is very clean and readable.

4. Reverses: Reverse is a technique that places white or bright type on a dark background; some refer to it as a dropout.

Although Libération mostly uses white backgrounds, it also uses the reverse technique from time to time, thus making it stand out even more. In the image shown above, the dark image on the background makes the white and the red text more visible to the readers. It also shows a nice contrast, giving it a modern look as well.

5. Cutlines: A cutline is a line of type that goes under a photo, which provides descriptive information about it; some refer to it as caption. 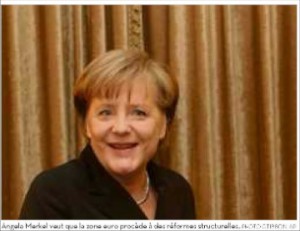 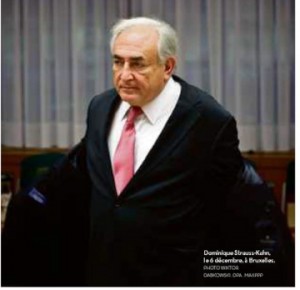 Libération’s cutlines are usually located right below the photo. However, at times, it can be placed on the photo, using the reverse technique. In general, cutlines from the Libération publication provides additional information about the photo rather than just describing it (usually in one sentence), which I found to be very helpful to the readers. Again, Libération uses a sans serif typeface; it is clean and easy to read.

6. Bylines & credit lines: A byline tells the reader the writer’s name of the article. It is usually placed at the beginning of the story, but there are times when it is placed at the end. A credit line is the photographer or artist’s name of a photo or an image. 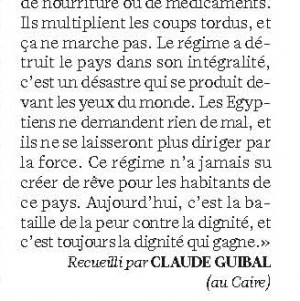 The byline is usually located in the beginning of the story, between the headlines and the story. Libération also places them at the end in some of the articles. Those that are placed in the beginning are aligned to the left, while those at the end are aligned to the right, showing a nice structural balance. The writer’s name is always capitalized and in bold font, allowing the name to stand out from the body text.

The credit line is usually located right below the photo along with the cutline. All the letters are capitalized in a sans serif typeface. It has a very clean and professional look. It is noticeable but does not stand out too much, so it’s not disruptive to the reader.

7. Folios: A folio is a type that includes the newspaper’s name, date and page number; it is usually located at the top of an inside page.

Libération’s folio is located at the top of every inside page. The newspaper’s name, day of the week, and the date are on the outer side of the page, while the name of the section and page number are on the inner side. All of the letters are capitalized, but just the day of the week, name of the section and the page number are in bold, which shows a nice contrast in design. The typeface is different from the body text, so the readers are able to easily distinguish it. Moreover, the iconic diamond-shaped box from Libération’s nameplate is placed between the section name and the page number to add color and consistency throughout the publication. Also, depending on the section of the paper, the color of the box changes, which is a nice design element.

8. Wraps/skews: A wrap/skew is a text that is indented or curved around an image or illustration; some refer to it as a runaround. 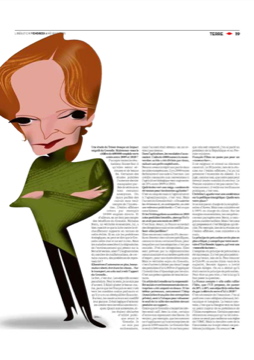 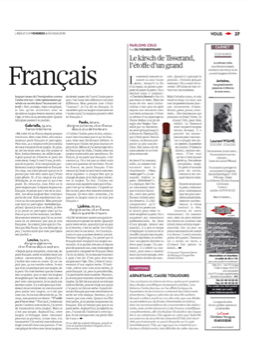 In using wraps/skews, Libération indents only a little. Just like the images shown above, there is only a slight curve on both of them. Libération has a nice balance between readability and design in its publication, but overall, it seems to prioritize readability over design.

9. Sidebars: A sidebar is a small story that goes together with a bigger story on the same topic, providing extra information. 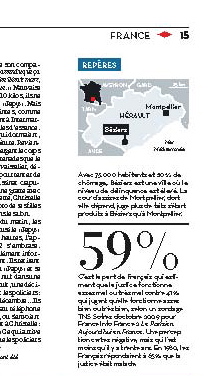 Unlike other publications, which often use boxes for sidebars, Libération uses some kind of heading to indicate that it’s an additional story; the color varies, depending on the section, but they are usually red, aqua blue or magenta. Often times, it includes maps, diagrams, infographics and figures; other times, it is mainly text. In addition, instead of using lined borders, Libération effectively uses white space to make a distinction from the main story. Thus, it gives a more clean and professional look.

10. Pull quotes: A pull quote is a quotation that is taken from a story. It shows a high contrast to the body copy by using different typefaces, either in bold or italics, or in a different size and color. 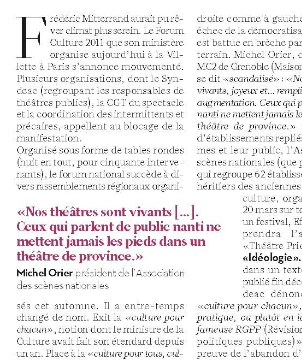 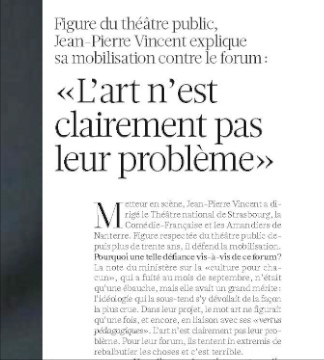 Libération uses pull quotes quite often. The quote is always bigger than the body text and also in bold font. The quotes are usually in black, but depending on the article, they can be in the color of the section flag. The colors add a contrast to the body text, allowing the readers to easily spot them. They are usually placed in the middle of the article, but at times, they are located at the beginning of the story. In addition, I find it interesting that instead of “ ”, the French people use « », and I think the shape of the quotation marks that they use creates a better balance in grouping the words and provides a more definite closure for the quotes.