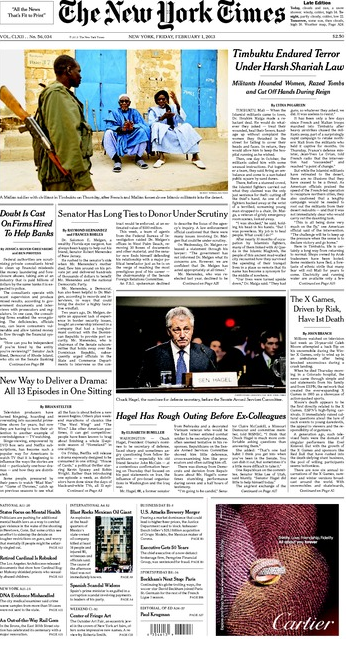 The New York Times is a broadsheet style, six-column format American newspaper that covers both national and international news. It follows a modular format in that it’s a clean, unfussy and easy to follow publication as far as how the content is laid out. The design has a linear sort of visual path that takes your eyes generally from the big photo and then moves clockwise (sometimes counter-clockwise if the photo is right-aligned, nevertheless it still moves in a purposely designed path.) The purpose of A1 for such a monumental publication as The New York Times is that its what piques the readers curiosity–the page that will get them to buy and read the paper. The staple, or the cause, of that curiosity is almost usually given to the lead photograph on the page–taking up a majority of the time a good chunk of space on the paper. This is just one of the many design elements that the Times has become notorious for and perhaps inspired other publications to follow lead. 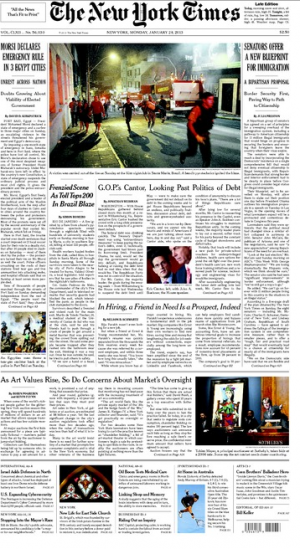 Another design element that the Times uses is the split between horizontal and vertical columns. Usually associated with newspapers, the Times will generally tend to follow a format of the upper-half sticking with vertical columns and the bottom half employing a mix of both horizontal and vertical. It helps break too much monotony or visual staleness and allows for variety–in a clean and traditional way. They also use a serif typeface that is seen in not only their masthead, but their headlines and body text as well. This works well with their clean and fuss-free approach because readers are probably not going to want to see a mix of traditional with modern. The Times has played well with their traditional format and has learned how to maximize it to their benefit, often relying upon the cover story to help really bring the eye in.

The hierarchy of the how the information is laid out is also very adhering to traditional newspaper style. Usually the main story will employ a bigger and bolder typeface along with an oversized photo. That becomes the focal point of the cover–the rest of the content will surround it and range from regular or thicker fonts, but the same size body. This is perhaps one of the downfalls of the Times in that it encourages a competition of attention for the stories on the front page–almost as if there is not enough space for all of them to fit on. Although the eye first focuses on the main cover story with the oversized image, it can often get confused as to what story to follow first. 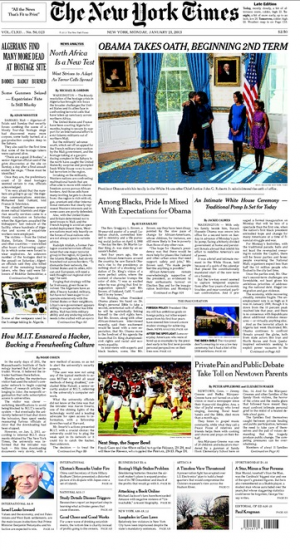 The overall tone and attitude of the paper is one of a higher quality/mental capacity. These are not light stories, but they are also not The New Yorker in that that carry on for thousands of words. They are to the point but with a intellectual insight that can be considered very self-aware. However the reputation of the Times is one that carries monumental respect not only for its content, but the way the content is written–as well as the clear, traditional and consistent design. That is part of what has made them such a staple and surviving newspaper. They know what their audience appreciates and don’t attempt to disrupt the status quo. Their readership is a loyal one that the newspaper doesn’t have to rely on because of the notoriety the paper upholds–but keeps it critical to its purpose.