Nameplates – nameplates are the graphic element that tells the name of the newspaper on the front page. The nameplate includes the publications name, the date, the price, the edition and the volume. The nameplate is also called the flag.

Teasers & promos – teasers and promos are graphic elements on the front page that promote stories found inside the newspaper. Some teasers are just made with text, but the best way to grab the reader’s attention is to pair it with graphic elements.

As seen in the image above, The Dallas Morning News does not use many teasers on their front page. The only story on this particular page is for the Dallas Mavericks’ win. The teaser uses a blue background to help it stand out and is accompanied by a part of the team’s logo. The Dallas Morning News could use this space to highlight additional stories throughout the newspaper. They could even put some teasers on the bottom of the page, which they do not.

Rules – a rule is a straight line placed on a page that separates different sections of a paper or separates stories.

The Dallas Morning News uses a variety of different rules throughout their paper, and they lean more towards rules than boxes. In the paper that I looked at, there were no boxes used in the entire paper. Instead, the designers utilize different line weights and colors to show story packages. 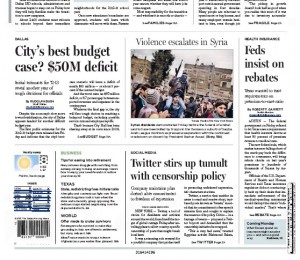 Boxes – boxes are ruled borders placed around a story, often to package text and images together. The box is usually placed around the story that deserves the most emphasis on the page.

As stated above, The Dallas Morning News prefers rule lines above boxes. The only boxes that could be found in the paper were for advertisements.

Sidebars – a sidebar is a smaller story accompanying a larger story. Sidebars come in many different forms including lists, glossaries, quizzes, charts, maps, Q&As and bios.

The Dallas Morning News uses several different types of sidebars throughout the newspaper. This particular sidebar is a bar chart regarding spending. The bonus to this sidebar is that the designer utilized color to show positive and negative spending. It makes it easier for the reader to understand where the money is going. Other sidebars in the newspaper include maps and excerpts from emails. 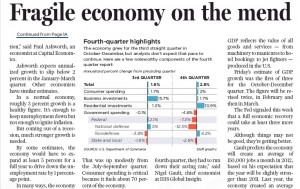 Section flags – section flags are logos that set off each section of a newspaper. They allow readers to jump to specific sections easily. The type of the section flags is different from regular text on the page.

Cutlines – a cutline is the caption that accompanies a photo. It usually tells what’s happening in the photo, as well as additional information about the story. 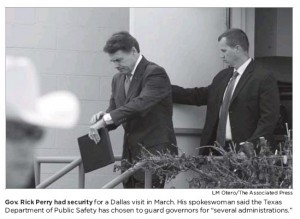 Bylines & credit lines – a byline is placed at the beginning of a story and gives the author’s name and their credentials. A credit line is similar to a byline, but it is used for images and graphics. 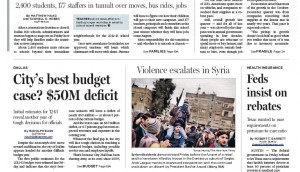 Folios – folios appear at the top of each of a newspaper’s pages and tells readers the paper’s name, the date, and page number.

The Dallas Morning News has very simple folios on its pages. It includes the name of the paper, the date, the page number, a possible website and occasionally the title of the section. After looking through the newspaper, I noticed that the folio is not always consistent. There is not always a section title on each page and there isn’t always a rule line under the folio. I would like the folio much better if it remained consistent throughout the entire newspaper.

Pull quotes – pull quotes, or liftout quotes, are quotations taken directly from the story and used as a graphic element in the story. The quote is usually bolded or italicized and set off by rules. 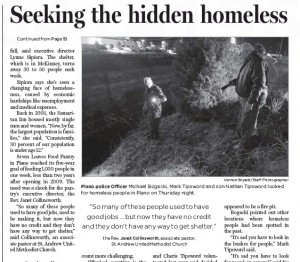