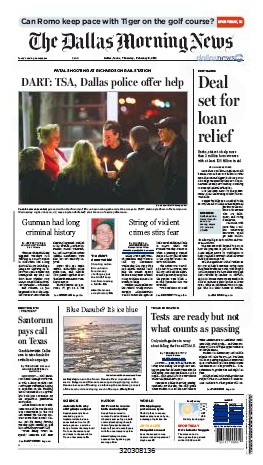 The Dallas Morning News (DMN) uses a broadsheet format for the paper. It measures in at 21″ x 11″.

The paper mainly uses a six-column grid for its layouts. If there is one thing the paper needs to work on, it is keeping the grid system consistent throughout the daily publications. Various articles range from a four- to seven-column grid, and it is distracting in the page’s design.

The DMN uses a modular design for the font page. Designers accentuate these different rectangles with rule lines around stories and sections. The paper regularly uses one large image, usually above the fold, and builds the rest of the page around that image.

The purpose of the front page is to give the readers the most important stories for the day. The stories that are used have to catch the attention of the reader so that they will buy the paper. The DMN does this by putting their dominant image and story above the fold. They usually feature three to five stories on the front page.

As with many newspapers, the DMN has their nameplate placed at the top of the page to alert readers of the paper. However, the paper usually does not place a huge advertisement above the nameplate like other papers. If an ad is used, it is a thin strip of text with possibly a small image. Each issue has the weather, an index, and refers to other stories inside the paper. The front page has three to five main stories with two to three images. 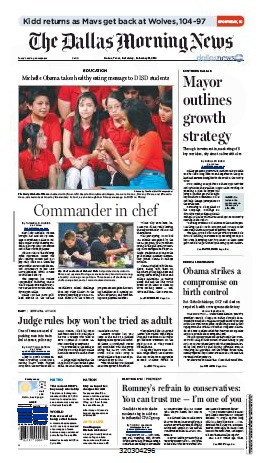 The information is organized with the dominant stories on top and the smaller stories on the bottom. The main story is usually above the fold with a larger typeface. The stories get smaller as they are placed further down on the page. The typefaces also get smaller for the smaller stories. The box with the weather, the index and refers is either found at the bottom on the page of in the left column depending on how the page is layed out.

The DMN definitely features hard news stories on the front cover. There is a mixture of local news with national and international news. The “feel good” stories seem to be placed inside the paper instead of on A1. Currently, the paper usually has a story about the election and politics.

The paper focuses on the hard news stories and the news that the paper believes readers should know. Other stories that could be more servicey or have a happier tone are placed inside the paper. The DMN offers a range of stories from across the country to some international stories mixed with local stories happening within the Dallas community. This gives readers the opportunity to find out what is happening around them and across the world. 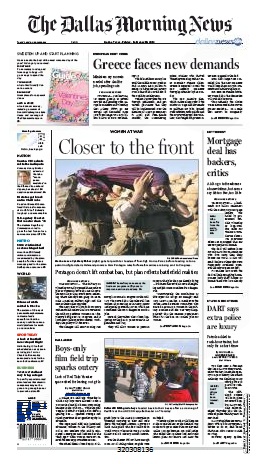