I’m actually really happy to be studying and learning more about the United Kingdom’s daily, leading newspaper The Guardian. The paper, which is vocally very liberal, seems to have an attitude that many American—traditional—newspapers will never have, but an attitude that many European papers intimately share. In fact, The Guardian is not afraid to use profanity (a lot) in print. When some readers questioned the paper’s sometimes-extravagant use of profanity, the paper released a segment from its style guide, which states, interestingly:

“We are more liberal than any other newspapers, using language that our competitors would not. But even some readers who agree with Lenny Bruce that “take away the right to say fuck and you take away the right to say fuck the government” might feel that we sometimes use such words unnecessarily.  The editor’s guidelines are as follows:  First, remember the reader, and respect demands that we should not casually use words that are likely to offend.  Second, use such words only when absolutely necessary to the facts of a piece, or to portray a character in an article; there is almost never a case in which we need to use a swearword outside direct quotes.  Third, the stronger the swearword, the harder we ought to think about using it.  Finally, never use asterisks, which are just a cop-out.”

One of the best gems that comes from this style guide notation is the nod to respecting the reader. So, when the paper switched to Berliner format in Sept. 12, 2005, the paper wanted to hear from readers, who seemed to heartily accept the new layout. There was many reasons for switching to Berliner format, including: readers could more easily flip through the paper on transit and images could now spread across the gutter. Furthermore, this transition made The Guardian the first paper in the United Kingdom to print in full color on every page—which spans five columns. The Guardian’s sister paper, The Observer, followed in 2006.

The Guardian follows a modular form in its print publication. Often locking stories into a rectangular space (ranging a familiar two-column width) with, generally, a vertical or horizontal picture on the front page. Occasionally, the modular form breaks with a graphic spreading across the gutter, but it appears that the paper values its white space. Moreover, the paper will regularly host a picture or info graphic that spreads across all five columns, but most oftentimes, only inside.

The front page of the paper is not that different from the rest of the publication, and it’s certainty not as exciting as it has the potential to be. The front page is very traditional. It’s has about three of the more important stories spread across the page with a picture accompanying one of the stories. It’s not splashy or necessarily eye-catching. Its function is just what a front page is meant to do: showcase the big stories. The page has an index that sometimes changes location from day to day that features a smaller picture with each inside story. Occasionally, if there is an interesting entertainment story, the editors will highlight the story in a yellow text box below, or above, the nameplate. The design of the front page, like the rest of the paper, seems to appreciate white space. With the occasionally colorful highlight showcasing a story inside, the front page uses minimal color with generally that one feature photo accompanied by smaller index photos. The information on the page is often organized with three stories, modularly designed, with a bigger headline highlighting the big story of the day. The smaller stories on the front page have smaller headline fonts, leading to a noticeable hierarchy among the elements on the page.

If I were to make an assumption about what is most important to The Guardian, I would assume that pictures on the front page take a backseat to text (however, that is dependent on the day, as well). Inside the paper, it seems that photos and graphics aren’t afraid to devour a larger portion of the page. Depending on the day, and stories, the nameplate will move an inch up or down to accompany additional little snippets that are meant to lead readers into the publication. But, in general, the paper uses the front page to showcase what the editor’s feel is the most important story of the day.

The tone of the front page—to me—is received as very clean and relaxed. I think that the page has this kind of magazine texture to it. The paper—including the front page—does not feel cramped at all. The Guardian, which publishes about 45 pages a day, seems rather tidy. It evokes the attitude of “this is what’s important, and maybe, perhaps you should read it.” For instance, I don’t get the same feeling of “this is VERY important information” that I do when looking at the New York Times. The Times usually gives off this, “this is what you must read and you must read it now,” sentiment. I don’t get that feeling with The Guardian. I think a large part of that is because of the index, which is semi-colorful and usually focuses on entertainment news (not gray like the Times, even though the Times does have some color in its index, but even then the index is quite overwhelming). That being said, the front page sends a message that it has news worth reading, but content will seem relaxed, and honestly, that is due to the design aspect. I have never really thought about what the front-page design can say about the content throughout the rest of the paper.

The paper is pretty consistent from issue to issue. Even when the front-page changes up its layout, it’s usually a familiar change that tends to change on a weekly routine. But, the sections flow nicely from one another and the paper utilizes a different color, i.e. green text for the sports section, highlighting the different sections.

I actually really like the way The Guardian is designed. I think that it is a super clean, attentive layout—utilizing its white space as necessary and still placing big, bold photos and graphics across a gutter. If I had one critique, it would be that I wish that the front page pumped up its design and grabbed my eye a little more. But, baby steps, I suppose. 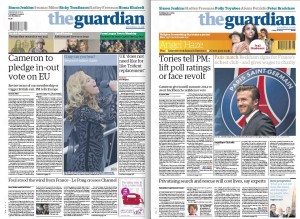