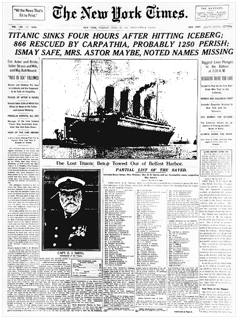 The New York Times front cover is summed up simply in the tagline that soars on its top, to the left of the flag. At the spot where the eye naturally begins reading, The Times tells its audience that this paper is about “All the news that’s fit to print.”

And that concept is carried across the broadsheet paper’s six columns, thoroughly. The modular layout keeps columns organized very meticulously, so that rectangles fit into one another in vertical lines.

The front page is composed of the most fit news, the most important naturally up top in the hierarchy of stories, with photos and infographics serving clear roles as supplements to stories that deserve additional storytelling, guidance and entry points.

The rest of the paper’s front page is fully functional and completely consistent, and every element is decided based on that philosophy. Rules, headlines, subheads, bylines, teasers – they’re all clean and professional, not overstated or emphasized. When a story deserves big play on the front page, it’s still done with consistency. Reliability is key. 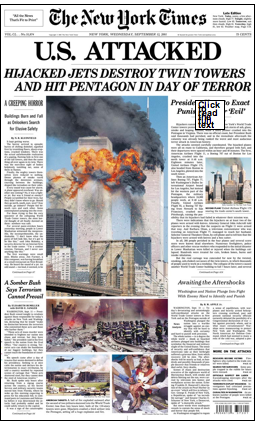 For the New York Times, content is king. Context – the design – is there to operate for the content. The Times’ classic style fits the paper’s vibe nicely. The Gray Lady is stoic and serious. Because of that, the message of the design is clear: The information you are consuming is significant and comes from an authoritative source. The Gray Lady does not mess around.

When the Times decided to put ads on the front page in 2009, it was a drastic measure. The New York Times’ front page is sacrosanct. Now, I’m used to see a strip of colorful advertising below the fold, but just how significant that was to this paper was played out in the documentary, “Page One,” shown at Newhouse last semester. The A1 meetings that take place in the Times’ board room are cut-throat, with editors vying for play on that esteemed page. It really, really means something – and takes a very special something – to be displayed on A1 of the Times.

Media writer Brian Stelter, even in his glory at the showing of the documentary he helps star in, modestly spoke of his pride in appearing on the front page. When something makes front page at the Times, whether it’s a story, a scoop, or a writer, it’s important. That seems to be the prevailing attitude toward the design, as well.