For the past two months, as I have scoured and stared at The Guardian online, I have both praised and criticized the paper’s effortlessly modern, occasionally boring, layout. And though, with a newly designed layout, fonts included, the publication has also made color accessible on every page.

Starting with the front page, the nameplate is generally always the same, featuring the name in two shades of blue—occasionally putting the name in a blue box (which then features The Guardian in white). The first time that I looked at the nameplate (and the whole front page) it kind of felt like the newspaper was more of a newsletter. But, as I continuously read the paper, the nameplate started to grow on me. The blue colors make the name pop, but they are also muted enough to not compete with headlines and pictures on the page.

It seems that the front page, like the rest of the newspaper, uses color lightly, often letting the advertisements carry the colorful weight, but more on that later. Throughout the paper, the colors that are used (whether for headlines or special stories) always seem subdued. Headlines, body copy and subheads are almost always traditionally black. But, when there are special stories, the colors don’t ever really jump from the page. That being said, I believe that the stale colors actually assist with the overarching traditional, yet modern feel to the paper.

The Guardian does have a slight pattern when it comes to how it uses color within the pages. For instance, the publication has all if its section names highlighted in a color. It also, uses color for the teasers throughout the paper. The paper also changes how it lays out the teasers on the front page—though the changes are repeated—color helps assist.

On the front page, the teasers also take on a hefty colorful weight—always featured with colorful text or a box.

Though the paper doesn’t use color as much when it comes to its text, it makes the photos and ads really stand out. For instance this picture:

This picture, which was featured on the front page, is the first thing that grabs my attention below the nameplate (and I before I even look at the nameplate). The photo might mostly be relying on the red color, but many of the pictures throughout the publication jump off of the page because it’s the only colorful object on the page.

Advertisements, in general, really stand out as well. The colors are sharp and in focus, and many of them are full-page ads.

Overall, I think that the newspaper uses color fittingly—as in, keeping to its look. The color, except when looking at pictures (which is wanted) is never a distraction. The front page, which is the most colorful page, never seems too busy. Also, the paper balances its whitespace with color, especially on the front page. I tend to think that the modernity of The Guardian is subtle, and the use of color on every page is muted and fits right into the look of the paper. 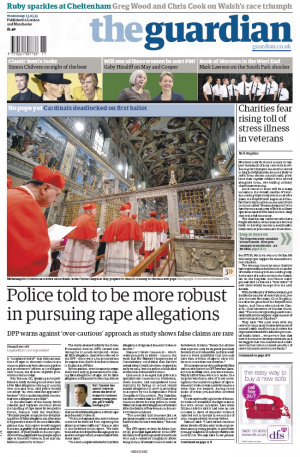 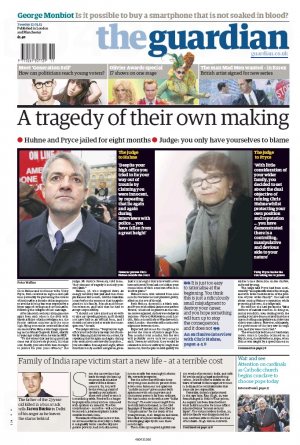 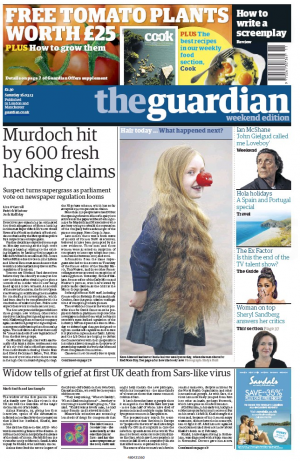