The local front at The National is always on page four. Besides the fixed page number, the page is clearly recognizable by the use of a top bar on the page with the title “The Emirates” styled similarly to the newspaper’s nameplate. Both have a light-colored bar underneath to separate the title from the content, and the color choice is the same (first word in a light color, second word in a darker color and no space between the two), however what differs is the use of caps. In the nameplate, “the” and “national” are both in caps but for the local front, “the” and “emirates” are both all in lowercase.

There’s always one ad on the page; it can be a banner on the bottom or a three column wide by half column high ad. The rest of the page is then divided in two or three blocks. There’s always one big photo on the top right side of the page that takes three or four columns. The photo can relate to a story or be the story itself. Then there are two other stories (occasionally three if the photo alone is the story) that are arranged in this way: one always starts with the headline on the top left corner and the other one is always bellow the fold. Taking the same number of columns as the width of the photo.

Two bars, one dark blue and the other light blue, separate the stories from each other. The decks are also decorated with thin lines enclosing them in a specific space even though the typeface and font makes them stand out by themselves.

The local front is always on page four.

The difference between the local front and A1 is that somehow page four feels narrower than A1. I think this is because 1) A1 doesn’t have ads, and 2) all of A1 stories are continued elsewhere in the paper while at page four the stores are either continuing from A1 or start and end in this same page. Thus, there are less headlines and photos and more full-text columns.

All the pages in The National are full-color. There’s not a single black and white page in the publication. The content is distributed in a very structural way, the paper doesn’t experiment much with wraps or unorthodox designs. It’s always a six-column grid; it’s very angular and constrained.

Unlike other newspapers, the stories don’t start on the top of the page. The top is always reserved for the section name or for small bits of information. Horizontally, the stories are separated by bars and vertically they are separated by a larger gutter, approximately three or four times the regular gutter between columns in a story.

On each page there are usually three stories and they are put in order of importance not only by location on the page (top: most important, bottom: less relevant), but also by the size and weight of the headlines. This creates a strong visual hierarchy that helps the reader identify what is most important and make sense out of the information. 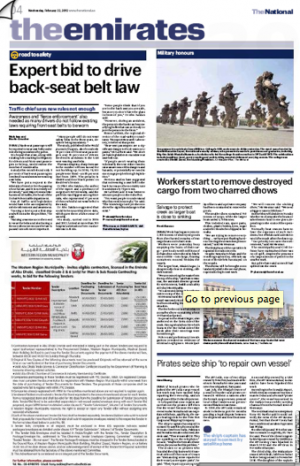 The ads on the pages don’t disturb the reading and are limited to one ad per page or even one per spread.