The New York Times does an interesting balancing act when it comes to “local” news. Because the paper definitely sees itself as the nation’s local newspaper, different editions cater to different audiences and different “locales.”

I have the Times delivered to my house on Sundays – and used to get the paper daily – and I’ve realized that my “Upstate New York” location means that my local news is different than what someone in the Big Apple itself would see (specifically, there is a lot of coverage of Westchester county). 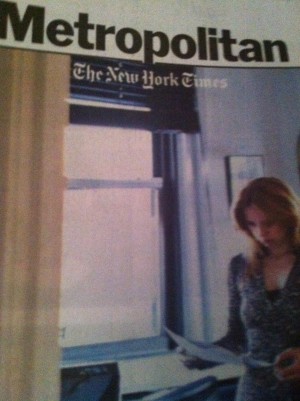 Either way, there’s a “Metropolitan” section in the Sunday paper with it’s own unique local front, geared toward the NYC crowd. And each other day of the week, the local “New York” or “Region” section makes its way into “A” at the end.

The “Metropolitan” section is almost a newspaper within the newspaper, with breaking news, features and columns all tied in to the section. Many stories are presented on the section front as if it’s an A1 all on its own – but an A1 with a different approach.

The philosophy of “all the news that’s fit to print” is abandoned for a more leisurely feel. Different kinds of stories open on the section front and images take up more space. Still, the Times sticks to its utility principles – nothing too fancy or straying too far from the norm, and maximizing the space with loads of information. 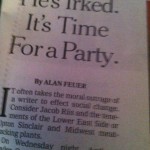 A headline and byline on the local front - not too much changes from the rest of the paper.

Architecturally, different elements are used to create hierarchy, like size and prominence on the page. There is less competition than on A1, so it’s easier to tell where your eye should drop. Grids here are actually skewed – there are four columns in one story, and five columns below it, splitting up two different stories, each with different column widths. This seems to be working just fine, because the layout is modular and it’s quite easy to tell the separation of information.

Many of the smaller elements remain the same as A1 and the rest of the paper. Lots of rules are used in The Times. “Metropolitan” has a section head in the same sans serif 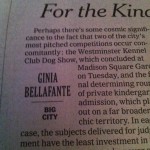 The paper's feature-style headline and byline, appearing on the front of Metropolitan

typeface as the rest of the sections in the paper. There are promos on the section front, and they receive a lot more attention and space than on A1. 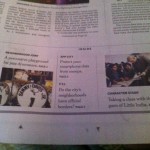 Promos are given a lot more space on the local front.

When I began perusing The New York Times for an ad-editorial ratio, I was actually quite surprised to find many ads – enough that I’d guess this paper is about 40 percent advertising. I suppose I shouldn’t have been surprised!

Inside The Times, the pages really do become somewhat lackluster – especially in the harder news sections. Ads take up quite a bit, and often leave stories running in tiny rails alongside them or unnoticeably above them in a thin strip. 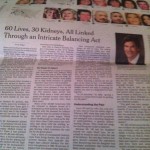 While some articles are tossed aside from the design team, bigger and lengthier stories can be designed quite nicely, like this one with lots of subheads to guide the reader.

Beyond advertising, the pages are often bland. There is a lot of information to get out, sure, so stories that don’t lend themselves to looking appealing aren’t really amped up or attempted by designers. Major stories and stories with lots of photos get a better shot. Lengthier, spotlighted pieces make good use of subheads, bugs, infographics and photos.

Photography is a go-to for amping up page design in The Times. Almost every page with editorial on it has photos. This is a quick fix for the often ignored design, but sometimes it doesn’t help – and only serves to make the pages appear more cluttered. 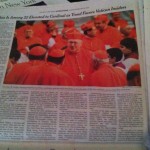 This is a nice use of color on a quality photo featured on insider pages of the news section.

I think that The Times uses color pretty realistically. The ratio for the news section was 7 out of 26 in color. The color was at just the right spots, with photos or designs deserving the extra splash, getting it. The Times is also more liberal with color in the other sections of the paper, particularly features. The “Metropolitan” section, for example, is almost completely color.

I definitely think that The New York Times design team is obsessed with covers. The nice thing is that that attitude extends past A1 onto all the different section covers. The inside pages seem to often be ignored, but it also seems fairly practical do so with the way that The Times approaches information. It’s a decent policy of allocating design resources – though of course, if every page looked as clean and deliberate as the section covers do, it would be much appreciated and I would definitely be more likely to read stories that weren’t started on these covers as I flipped through. 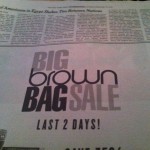 This poor article was shoved and squished above an ad. I wonder how many people read it who wouldn't have sought out the story because of that?