To a point, latimes.com mirrors it’s print counterpart, offering a minimalistic, bare-bones approach to design. The website utilizes a serif font for all text displayed on the home page, including headlines, subheadings and body copy.  Save for photos, the website is dominated by black text on a white background, again, differentiating little from the newspaper’s physical layout. The lead story is typically accompanied by a stationary photo with a headline underneath and story following it. 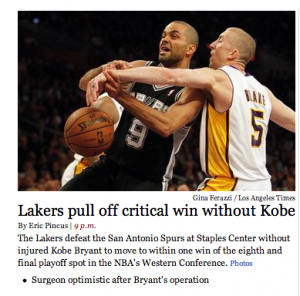 The website’s homepage is relatively text-dominant, with a rail of the day’s remaining news worthy items running alongside the A1 story. Hierarchy is fairly simple to discern “above the fold” — what I’ve used to describe what viewers first encounter when they’re directed to latimes.com. But the website becomes a hodge-podge of “everything else” cluttered together the further you scroll. It descends in sections, from the Sunday Section, to photos, to religion and travel. Multimedia elements, including a Twitter feed and box for video  are placed in modules below the fold. I feel this aspect of the website could be played up more as it begs for the most user interaction. 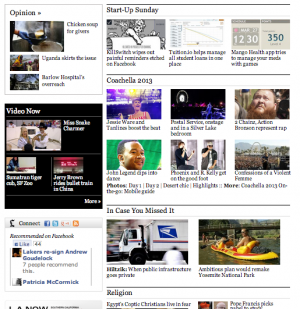 Design elsewhere on the website, such as in the Local, World or even Entertainment section likewise follow a format similar to the homepage’s. The LA Times tends to strip stories horizontally and provides a sentence or two, or caption to accompany headlines. Navigation is fairly standard, again mirroring the print product, which utilizes white text on a color-blocked background to introduce sections.

I don’t think the the LA Times’ transition has been seamless, it lacks the level of user-friendly interaction the web offers. Right now, it looks like latimes.com is more of a dumping ground for stories in the newspaper’s print edition. I think this could be helped by more interactivity and color — the space and cost restraints of working strictly in print don’t exist online and I feel the newspaper should capitalize on that.