The Los Angeles Times is a paper based heavily on a sense of traditional newspaper style. This publication’s typographic style is composed of primarily serifs. The serif is clearly used in the Times’ nameplate, seen deeply bolded at the top of A1.

As stated in a previous field notes post, the tone of the paper is serious and reliable. These attributes are reinforced by the chosen serif typeface. The style is very consistent and therefore reliable. It is modern enough to appear legible and concise but is doesn’t not stray away too far from the traditional so as to not falter in credibility.

The serif typography used throughout the paper is varied by size and font-family. For instance, The headlines are always larger than the story text and are set in a bold font. The degree of boldness and size change with every story (typically the hierarchy of the story on a given page). This, along with story positioning, gives the perception of story importance. Decks are also in a serif font but are not bold, instead they are set in a smaller type size from the headline of the story.

Body copy is written in the serif typeface but appears to be a more roman font (not sure).

Cutlines and bylines are all of a serif typeface as well. They are distinguished by boldness and size.

Although sans-serifs are not often represented in the paper, there is a distinction in typefaces, however, in the opinion section of the LA Times, as well as the small detailed graphics. A sans-serif is used for the “contact” blurb at the end the bottom of the opinion page. For the graphic, I discovered, there is a sans-serif used for county names on a small map. The style is small and clean and is set off by a slightly larger, bold, serif typeface. 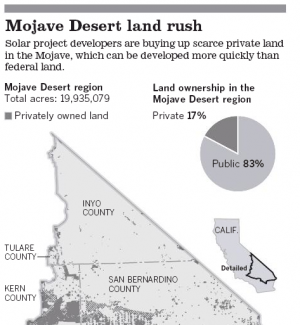 I think the serif typeface works for the Los Angeles Times because their designers are able to skillfully use font-families and size to create a distinction. The consistency is key here and adds to the strength in reporting as well. For me, it gives the impression that the paper has no need to lean on “changing things up” because it knows that its product is good.

The paper itself may not be as “jazzed-up” with varying styles but the subtle combinations works.