Mother Jones reflects a traditional feel for journalism mingled with a modern perspective and alternative approach in looking at issues in its use of typography. This is shown in their use of serifs and san serifs throughout the publication. It was difficult for me to find which typefaces are used through the news magazine, but Mother Jones doesn’t implement many different kinds from issue to issue. It usually sticks with the same ones without creating a sense of predictability for the reader. There is a constant through the sections and departments, where dedicated readers can recognize which is which.

From the front cover to the table of contents and front of book stories, Mother Jones’ headlines and subheads alternate in use of serif and san serif. In the feature well, there is more use of one typeface for the headlines and decks. This works well, in my opinion, because the audience is able to distinguish the stories from one another and it gives a sense of priority and hierarchy.

The nameplate of the publication is a traditional-looking boldface serif. It gives the vibe of seriousness and timelessness, while the rest of the cover does the opposite. While the nameplate never goes out of style, the publication does a good job in giving a modern twist on issues with their choice in other typeface, illustrations and photos. There is a good balance on the cover using serifs and sans serifs. Promos are usually done in sans serifs, still drawing attention but not taking away from the louder main headline.

There is an evident pattern in the publication’s table of contents. Headlines and summary subheads for features are always in the same serif typeface. This decision gives weight to the theme of serious journalism. In the table of contents, the byline is included for features and is always a sans serif, much like how it is in the story itself. It works well because it draws attention to the author but because of the size, it doesn’t distract. The departments are separated in the TOC, with the department name in a sans serif typeface. It doesn’t give the same feeling as the features, giving the reader the perception that these might not be as lengthy and serious as the rest. 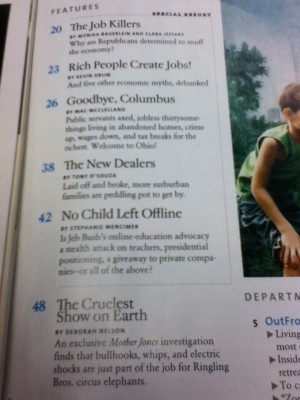 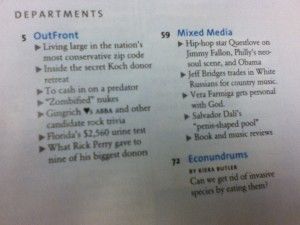 The typefaces in sidebar stories are always sans serif, a visual clue to the reader to make a distinction between the information. It also gives a feel that the information is different and carries less weight/importance. 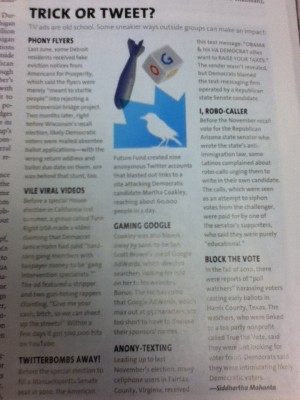 Typefaces used for the “OutFront” section are always the same in the headlines and subheads, and a drop cap is always used. There is a consistency and the reader is able to tell that the stories belong in the same section. The department name is in a serious serif as well as the headline. Headlines are kickers in this department, but nowhere else. The use of the typeface makes it read as an important news report, while the san serif subhead gives a lighter feel. Using an italic sans serif also goes along well with the theme of the subheads, which are usually sarcastic or thought provoking, jarring questions to the reader. 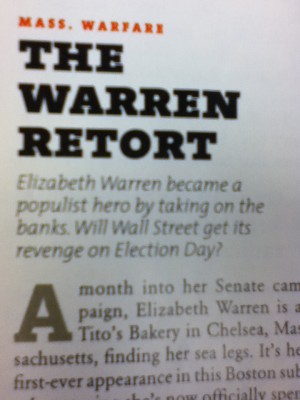