Mother Jones utilizes hammers in its headlines, with a few attention-grabbing words immediately followed by a few lengthy lines in the deck. It works well with the publication because of the types of stories they do, which are long-form, investigative pieces. The decks usually summarize and often ask a question to draw the reader in. Moreover, the decks pack a punch. They’re set up with a line or two about the story, and pose a question to the reader. There’s a snarky, clever tone to the headlines and the decks, which reflects the alternative and questioning perspective that Mother Jones has. They pose spunky, bold questions following their headlines, making the audience wonder. 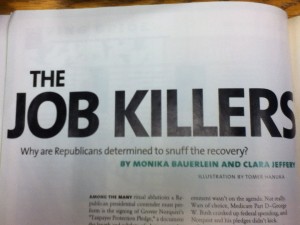 Pull quotes are a frequent sight in Mother Jones as a result of their long stories. It is fair to say that nearly all their feature stories, usually 5 or so in each issue, have pull quotes. They way they’re used in the publication, they’re meant to add drama to the piece, also to break up the long chunks of text. I was surprised that a lot of the quotes aren’t attributed. Many times, they are included in the bulk of the story and reworded for the pull quote, something akin to a summary. It is effective overall, because it gives the reader a controversial line or summary to the overall message of the piece. 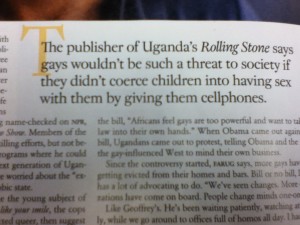 In the January + February 2012 and November + December 2011 issues of Mother Jones, not all photos and illustrations have cutlines and captions. The length of cutlines vary from story to story, but all of them describe the contents of the photo and reflect the tone of the accompanying piece. Photos for stories with historical significance draw details from the story into the cutline, while other more obvious shots identify the subject and will sometimes state an opinion of the aforementioned. Cutlines are usually placed below the photo or illustration, above or beside it, but Mother Jones will sometimes place the text on the photo itself using a reverse. The captions add more to the piece, not just reiterating old news. 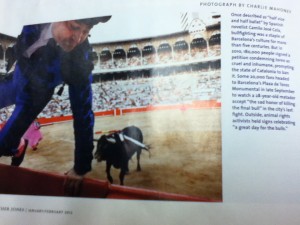 Bylines and credit lines vary depending on the section in Mother Jones. For their front of book section called, the bylines are at the end of the piece, with a dash followed by the author’s name. In the feature well and back of book sections, the bylines are right after the headline and deck with “by —–.” Though distinguished often by color, the bylines are simple and do not take away from the headlines or distract from the rest of the story. Credit lines for features follow the byline, while in shorter stories, they are found at the edge of the page, towards where the staples are. For credit lines, it makes it difficult to identify who the photographer or illustrator is. 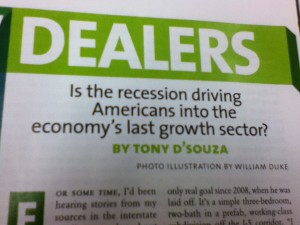 The number of promos on the cover of Mother Jones depends on the illustration or photo. In the January + February issue there are 3 promos at the very top of the cover, while on the November + December issue there are 4 promos placed alongside the main illustration. With only text to draw the reader into picking the magazine off the newsstand, the promos are controversial in wording, with examples such as “How to buy an election” and “Ringling Brothers – The Cruelest Show on Earth.” It is effective in that they are able to put their main features on the cover.  They give a sense of mystery but also intrigue, while tying into the overall snarky tone of the news publication. Even the titles for their infographics and charts reflect the sense of comedy and satirical personality of the publication. 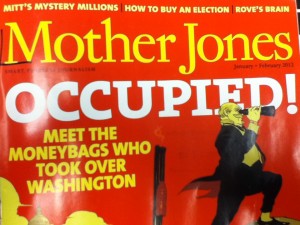 Lastly, the bulk of the department names are unique. The featured stories are simply labeled “Features,” which works well because the stories are always varied. In this sense, Mother Jones does something simple and traditional as a news magazine. The other departments are called “OutFront,” “Mixed Media,” and “Econundrums,” again giving personality to the magazine with its mix of political and environmental news, media news and economic reporting. 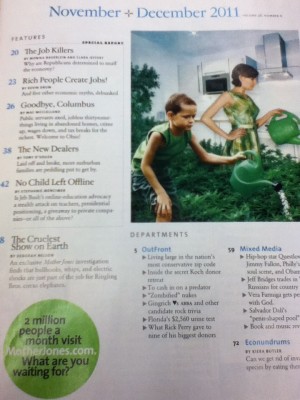