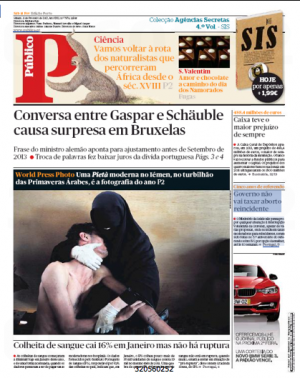 The format of Público is Berliner, which is typically 18.5 in x 12.4 in. It’s slightly larger than a tabloid but is smaller than broadsheet.

Público typically sticks to a 5 column grid. The inside pages adhere pretty strictly to this. The grid system, however, changes occasionally on the cover of the Sunday issue.

They also use a modular design. It’s really easy to distinguish the stories from one another. Rules and boxes are used to enhance the modular system.

Most newspapers display multiple stories on their covers, but Público does it a little differently. The cover mainly acts as a large tease to what’s inside the paper. Some stories start on the cover, but if they do, they jump pretty quickly. The cover is used more as a quick summary of the information. I actually think this method is pretty effective when attempting to draw the reader in. It’s very straightforward and doesn’t overwhelm the reader with a lot of text right up front.

The front page of Público is made up of various design elements. The first is the nameplate, which is always displayed in the top left corner. Rules are used to separate stories and teases. A variety of font weights is also used to create a visual hierarchy of the stories.

Hierarchy is usually distinguished by font size and color. A lot of times, more important stories will have a larger image associated with them than less important ones. Reverses are also used to highlight main articles.

The tone of the cover page is simple, fast news. It’s not as stiff as a front page that has a lot of text on it. It’s definitely more less intrusive because of this and easy to understand. You know what you’re getting the second you look at it. There’s no need to read further into things and “waste time.”

The overall message of Público is that it’s the news you want, fast. The teases on the front let you know enough about the stories so you can decide whether you want to continue reading. It almost works more as a magazine than a newspaper. It’s definitely a lot more modern in it’s design and message. 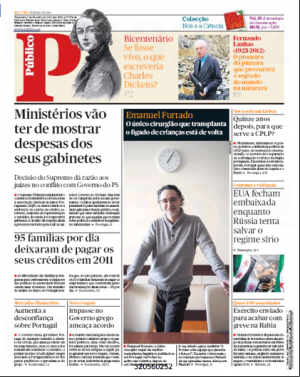 The grid system and the teases are what really keeps Público consistent from issue to issue. There is also a very strict use of black rules to separate stories from each other and flags from the rest of the content. The color scheme sticks to reds and oranges to further promote the identity.