The function of Real Simple’s covers is to bring in readers with the use of colors, images, and detail. The covers tend to have a setting which is appropriate for that month’s issue with images relating directly to things associated with each month. For example, the January 2019 issue has a bright cover of yellow roses, a teapot, and some fresh fruit on a marble countertop. Above are the words, “Start Fresh in 2019.” For the October 2018 issue, the cover is a closeup of a dark navy front door, with pumpkins and apples to the right of the door, and fall flowers to the left. The May 2018 issue’s cover is very bright showing a sign of spring. Showing a window with a flower bed of tulips below the window. The window is white while the house is yellow. All of these things relate to each month and each photograph is detailed and pleasing to the eye.

The nameplate of Real Simple is a sans serif font. This creates a modern, clean, and sophisticated look and feel for the magazine. The tagline is, “Life Made Easier,” which appears directly under the nameplate in much smaller font size. It is also still sans serif. Both nameplate and tagline appear on the top of the cover in the middle. Each month the colors of the nameplate change, but remain monochromatic. For example, the January 2019 issue has the word “Real” in light green while “Simple” is in dark green.

The number of inside stories represented on the cover range from three to five. The text for the stories is clear enough to read when holding the magazine away at an arm’s length. It is also in sans serif font with the same colors as the nameplate which change from each issue. The hierarchy remains the same on the issues. Under the nameplate, the name of the theme of the issue appears. This ranges from the right, the center, and left. The inside stories have small blurbs that appear under the name of the theme and relate to it. For example, the October 2018 issue has “Welcome to Cozy,” as the theme, with “100+ ideas for a simplified space,” “delicious dinners faster,” and “easy ways to feel calm,” under that.

As mentioned before, each cover uses bright colors and images associated with each month, which makes clear and comfortable consistency. The tone and attitude of each issue remain the same due to the sans serif fonts and images. 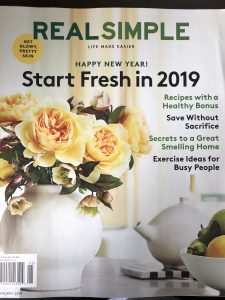 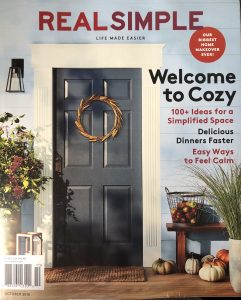 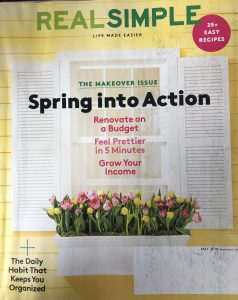 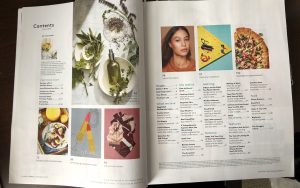 The departments/sections of Real Simple is easy to understand. Each issue has the same departments/sections: thoughts, editor’s note, real simple 24/7, your words, the short list, what we love, the realist, relating, balance, features, and food. The departments/sections all appear in order as previously listed. Readers can tell what section they are in because the name appears on the top left-hand corner of most of the left pages. Features tend to be in the back and offer stories that deal with home, personal life, and eating/food topics.