1) Nameplate: The New York Times’ design elevates classic and simple above all else. At its best, that comes out in its longstanding flag. The New York Times has been emblazoned across its cover with the same typeface since the 1960s. It really is the epitome of classic news design and works brilliantly to create a constant, timeless image.

2) Teasers: The other side of The Times’ simplicity is that they get away without flare. Their teasers are simply refers, without any strong attraction or presence on the page. The Times designers must either think their readers are very loyal, or their words are very powerful, if they don’t feel the need to draw them in with alluring design. 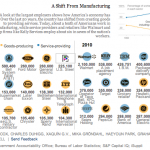 3) Sidebars: I wish The Times used sidebars and alternate story forms more. When they do, it’s so good. Thankfully, the online manifestation makes up for the print version that seems lacking. Often a lengthier feature article will be more highly designed, with sidebars. For example, “How the U.S. lost out on iPhone work” in last Sunday’s paper was dazzling in its creative infographics and alternate story forms. The article’s design still maintained its simplicity, but showed off some design chops, too.

4) Bylines and creditlines: Generally, authors’ and photographers’ designations in the New York Times are straightforward. Sometimes, however, I am puzzled why the standard “by XYZ” is tossed for “This article was written by XYZ.” The lack of consistently and apparent reason for change is frustrating.

5) Rules: I am of the mindset that The Times uses too many lines to separate its articles. Thankfully, the lines are very light, thin strokes, but it creates literal boxes around everything instead of using other techniques to help the eye draw distinctions. I do think, though, that erring on the side of separating content is better than creating confusion about what goes with what and where. 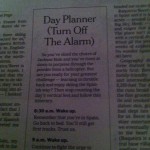 6) Boxes: Since thin rules dominate The Times, I think their boxes are less effective in setting off sidebars or special features. In certain sections, particularly features and pullouts, boxes are used more effectively.

7) Jump-lines and continuation lines: In the Times, directions for finding the other half of the article are done, in my opinion, expertly. They rarely interrupt the flow, the names of the jumps aren’t distracting, and I’ve never once found a mistake in a jump. Impressive. 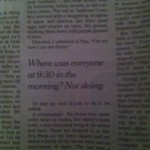 8) Pull quotes: I think the pull quotes in the New York Times are so lovely. It’s probably because I’m big fan of the typeface Cheltanham, and these put it to use so nicely. Additionally the literally pulled quotation seems to be resting in just the right amount of white space to gently pop.

9) Wraps/skews: Wrapping and skewing text around an image or graphic can be tricky, leaving words and phrases aloof on the page. The New York Times stays away from it in most cases, which is a good move for its very grid-dy, straight-up, simple design. 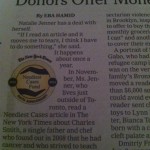 10) Logos/sigs/bugs: Indicators of packages or links among stories are somewhat rare in the Times, especially for its news section, but for lovers of in-depth reporting and series (lovers of good content, I would argue) the bug on the New York Times is like Christmas morning. The aforementioned iPhone article had one of these simple bugs in its body and I had to go online to read more.