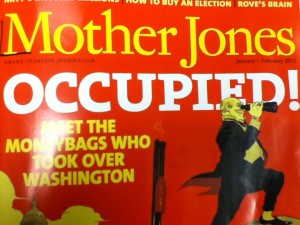 Nameplate – The nameplate is the name of the newspaper as it is displayed on the front page (Page One). It is also called the flag, set in the center of the page.

The nameplate of Mother Jones includes their tagline, “Smart, fearless journalism,” as well as the date of the issue. With each issue the color of the magazine’s nameplate varies according to what is on the cover. The typeface remains constant, reinforcing the consistency and values of the magazine; they stick to their overall journalistic principles as stated by the tagline. 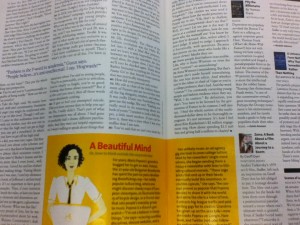 Sidebar – A sidebar is accompanying text, a shorter piece to a longer feature on the same topic.  It usually moves essential information not included in the larger bulk of text to the attention of the reader. Examples of sidebars include fast-fact boxes, a glossary, lists and quote collections.
Mother Jones uses sidebars in nearly every article in its January + February 2012 issue. With infographics such as bio boxes, tables, charts and timelines, the magazine breaks up complex ideas and complicated material, also giving the reader something appealing aside from blocks of text. Mother Jones uses a lot of bright colors in their sidebars to attract the eye to key points, sometimes even having two or three in one piece. In this article, the reader’s attention is immediately drawn to what is in the box. 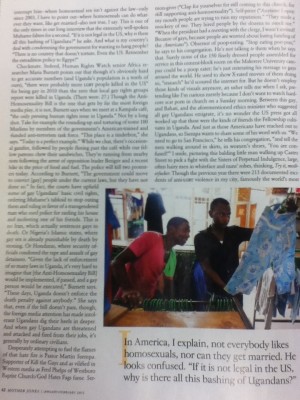 Pull quotes – Also known as liftout quotes, pull quotes are graphically represented quotations taken from the story. They are bigger and bolder than the rest of the text and showcase a controversial or notable statement.

With its investigative reporting, most articles in Mother Jones are often over three pages. The text is almost always broken up with pull quotes, breaking up columns and what would otherwise be a page full of black characters. In a long article on the societal view of homosexuals in Uganda, I found it interesting how pull quotes were used with pictures, often placed alongside or underneath them instead of elsewhere on the page. 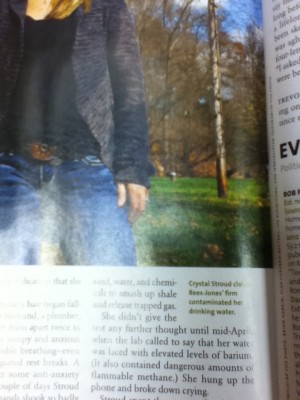 Cutlines – The caption of a photo or artwork. Lines of type that give information of what is in the accompanying photograph.

Mother Jones displays cutlines in different colors to get the attention of the reader. I also noticed that the text or the blocks put around it, follow the color pattern of the article, with carefully chosen tones to reflect a certain feeling. In an article about hydrofracking, its effects on the environment, people and the money spent, the cutlines were in a bright green, chosen for the idea of nature and also money. 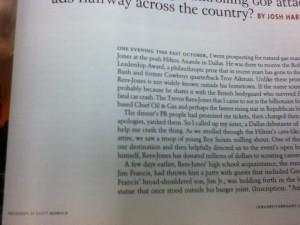 Bylines & credit lines – Bylines and credit lines give the name of the reporter and photographer/artist. Bylines are usually at the beginning of the story.

Bylines in Mother Jones are distinguished by a different typeface and size, usually bolded or italicized and sometimes in a different color. The use of color attracts the attention of the reader who may otherwise glaze over the author. I noticed that for cutlines, if it isn’t a big feature story where the photographer is given credit right under the reporter, it’s often hard to pinpoint the cutline as it is either on the side of the text, at the bottom of the photograph, or all the way at the bottom of the page. It makes it difficult to locate, which personally if I was the photographer, would be frustrating since the text is almost as small as the folio. 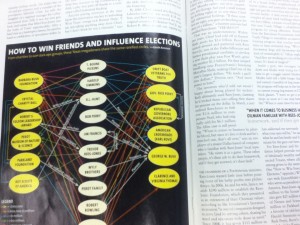 Reverse – Printing white type on a dark background, expanding the rage of contract on pages.

In this infographic, Mother Jones purposefully uses a black background and white text. The article is featured in their section called “Dark Money.” I feel as though they could have used any other color, but using black to display what they call “How to Win Friends and Influence Elections” makes a darker statement and reinforces what they want to say. It also breaks up the adjacent page very well, since the other is all text, it gives the reader something else to look at. 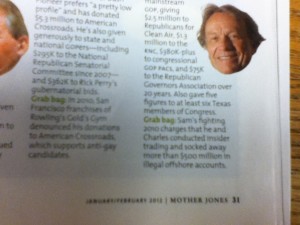 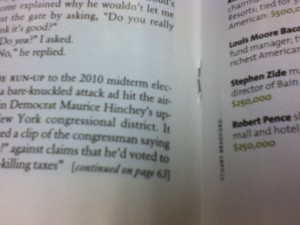 Because of their emphasis on long-form articles, pieces in Mother Jones are usually over three pages. As a reader, unless the topic is particularly interesting to me, I would not want to read five or six straight pages of text. The magazine does a pretty good job of breaking up articles and introducing new ones, so there were about three jump & continuation lines. In the January-February article, the three features were split up with the rest of the pieces towards the back of the magazine. 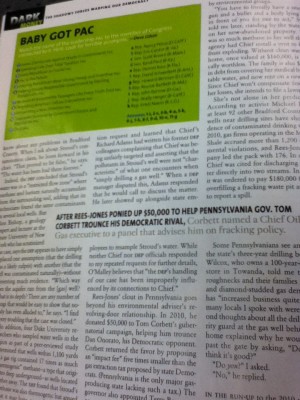 Wraps/skews –A wrap or skew is text that is indented or wraps around a photo or artwork.

The January-February 2012 issue of Mother Jones uses wraparounds sparingly, and skews even more. It fits well with the simplicity of their message. Their not trying to overload with tons and tons of information about different things, they have concrete ideas and stories that they tell in their “smart” way. With little use
of skews, the design looks cleaner and the reader’s eye does not move all over the place. When wraps are used, they are usually infographics, sidebars or pictures that indent the regular flow of columns, nothing too drastic. 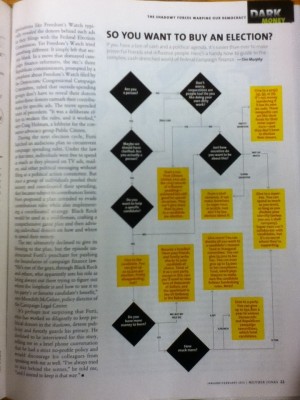 Boxes – A box is a ruled border around a story or art. It used to organize and separate elements and also for decorative purposes.

Mother Jones uses a good amount of alternative story forms, so it surprised me  at first that they wouldn’t put any ruled borders into use. However, it does conform to their simplistic and modern layout. With their format of bold colors and sidebars, ruled borders and boxes would be distracting. Their stories are on the complex side and they want to make the sidebars easy to understand, so putting any extra such as underscores or thick frames would take away from the message.