A strict framework of 18 departments organizes the content of The Economist. These departments include the following regions of the world and themes: The World This Week; Leaders; Letters; Briefing; United States; The Americas; Asia; China; Middle East and Africa; Europe; Britain; International, Business; Finance and Economics; Science and Technology; Books and Arts, Economic and Financial Indicators; and Obituary. The names are straightforward. What you read is what you’ll get.

The Economist’s departments structure differs from other magazines because there is no features well. Instead, special reports are broken into their own sections, while other important stories are placed into the appropriate section. Stories featured on the cover or table of contents are interspersed throughout the publication instead of clumped together. This serves the magazine’s philosophy of providing a broad variety of stories of about the same length, rather than a few feature articles.

The magazine maintains consistency between the cover and department fronts primarily through color and typography. Using the same typefaces on the cover and section fronts gives the magazine one unified personality. In addition, just as reverse type on red draws attention to the nameplate, reverse type on red draws attention to section names so readers know where they are in the magazine when flipping through. The use of language also unifies the cover and department fronts. As I mentioned in an earlier post, The Economist always uses smart, clever cover lines and headlines.

The section fronts themselves follow the general layout pictured below. 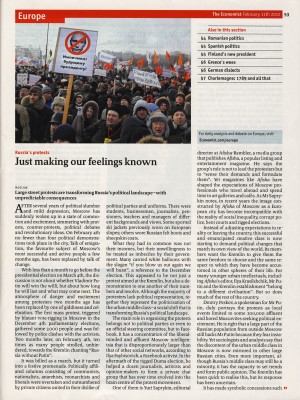 The notch in the red bar adds personality to the section fronts and appears less chunky than a straight red bar. It makes the publication look a little more thoughtful and sophisticated. The photos on section fronts are horizontal and either three columns or two columns wide. The three-column photos are the largest in the magazine, but still allow the magazine to run almost a half page of copy. The Economist only runs full bleed photos on the cover and on section fronts for special reports.

Putting a lot of text on section fronts emphasizes that The Economist is really a magazine for people who like to read. Plus, it’s a very economical design. Since there are so many sections, using large photos or headlines would make the publication very long or require editors to include less content. The refers list all stories in a section, at the same size and weight. Designers don’t suggest which stories are the most important in a section by promoting them with photos or larger type. It’s up to readers to choose what interests them from a neat, uniform list. 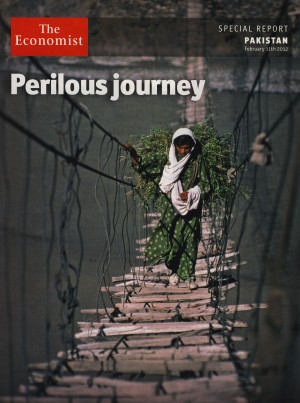 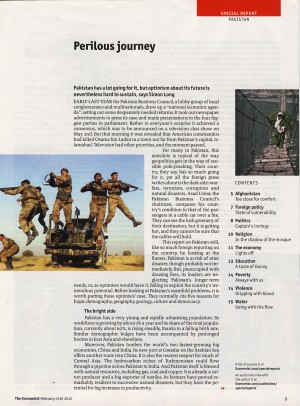 They forgo the red bar in favor of a tab that bleeds off the page, an effective choice. Because it bleeds, readers can find the special reports without looking at the table of contents or even reading the section heads. It’s even possible to locate it when the magazine is closed by looking at the top of the pages. Although I understand that not all pages can use the above approach due to space constraints, the special section designs feel cleaner and more appealing than typical inside pages. They really make me want to engage with the content.

Inside pages differ from section fronts because they use a blue bar at the top of pages and include multiple stories per page separated by a rule. Special reports lack rules between stories, but this decision leads to confusion. I think the tab alone is enough to distinguish the special sections from regular content, and the rules serve a useful purpose. Blue screens also organize content.

The entire magazine is full-color, which gives visuals a strong presence and allows designers to use color as an organizational tool for maps and graphs. The map below demonstrates the importance of color in the publication. 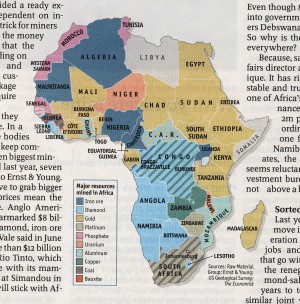 The pastels prevent the image from becoming cartoony.

As a rule, content rarely shares pages with ads. The two occasionally occupy the same page in the “Economic and financial indicators” section, though. Putting ads on their own pages makes The Economist seem like it has an independent voice and point of view uninfluenced by the interests of their advertisers. It also allows the publication to run provocative stories. Neither advertisers nor readers can complain about the emotional jolt of seeing an ad for speakers next to a story about famine or riots if the two never share space.

Even though The Economist feels dense and text-heavy, every page has some type of photo, cartoon, map or graph. This breaks up long blocks of text, adds a variety of shapes to pages and keep the reader’s eye moving. Overall, the inside pages are predictable because designers adhere so closely to certain standards. But this predictability is useful in helping readers navigate through the many sections. If designers used man different approaches on inside pages, it would be overwhelming. It’s the images themselves and the use of language that distinguish one page from another.