Drop Caps- Drop caps are large letters at the beginning of a paragraph that take up more than one line. They are also called initial caps. The Economist’s drop caps take up two lines and are followed by one or two words in small capitals. The use of a sans-serif font that is not too large reflects the publication’s serious tone and lends it a timeless feel. The drop caps do not seem stylish or trendy.

Boxes-Boxes enclose elements on a page to help organize information. The Economist often uses boxes with a light-blue background to prevent the magazine from becoming overwhelming to readers. Its pages are filled with lots of text, but boxes allow readers to navigate them with ease. 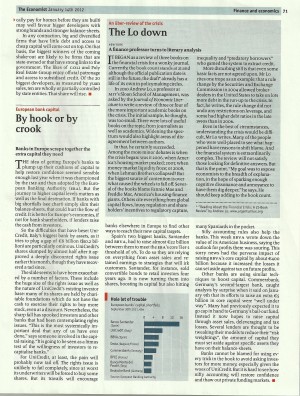 Folios- Folios are the page number, publication name, and date at the top of a page. My publication’s folio includes a section name, which is helpful because the magazine includes so many stories. Readers can easily locate the content they want to find this way.

Bylines and Credit Lines- Bylines and credit lines tell readers who wrote a story, took a photo or created an illustration. The Economist is unusual in that it does not have bylines or credit lines for most of its content. It only use credit lines to list sources for statistics and information, such as maps. The lack of bylines lends the magazine a uniform tone, instead of emphasizing the individuality of journalists. It also increases the importance of datelines. 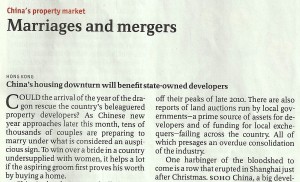 Note the prominence of the dateline instead of a byline

Cutlines- Cutlines are short descriptions that accompany photographs. My magazine’s use of a bold typeface for cutlines sets them apart from the text used for articles and creates a hierarchy for readers to follow. 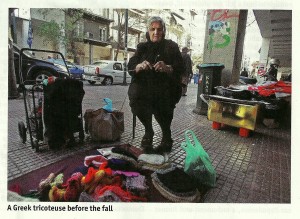 Nameplate- Nameplates, or flags, are the publication’s name as shown on the cover or first page. The Economist uses a traditional serif font to let readers know that their publication has a serious tone, but reverses the type on a red background. The bold red background grabs readers’ attention, just like a red stop sign with white text is impossible to ignore. 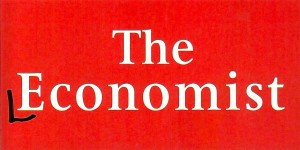 Teasers & Promos- Teasers, or promos, are graphics at the beginning of a publication or section that promote content inside. The Economist’s promos do not include pictures or photographs—they’re just simple lines of text with page numbers. This suggests that it is a magazine for intellectuals who are more interested in straight-forward information than flashy, trendy graphics. It also suggests that the stories alone are so informative that readers won’t need flashy graphics to hold their attention.

Reverses- Reverses are white type on a colored background. My magazine uses reverse type on red not only on the cover, as I mentioned previously, but also at the beginning of sections. The strong red color jumps out as readers flip through the magazine, allowing them to easily understand where they are in the publication and skip to a section that interests them without consulting the table of contents.

Rules- Rules are straight lines in varying thicknesses. The Economist’s use of  horizontal rules between stories that start on the same page prevents readers from becoming confused about where one story begins and another ends. Without them, readers would be completely lost on many pages. 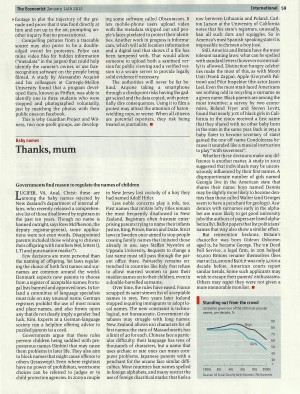 Refers- Refers are lines or paragraphs that refer readers to another story. The Economist sets refers to its website apart with color and thickness of font, most likely in attempt to increase the size of its digital audience so it can boost web advertising revenue. 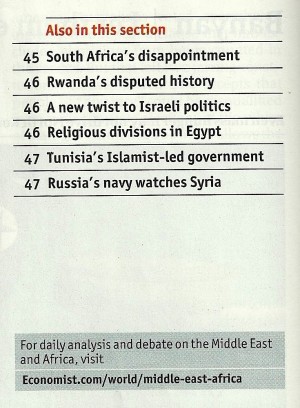