When immediately looking at The Guardian’s website—without really focusing—you can tell its modern and interactive. Right away, you see moving text, tons of color, different size photos and lots of sections. Without investigating and looking at the top of the page, the site feels focused and categorized (granted, my eye saw the moving, sharp red ad at the top of the page first). But, you instantly see numerous sections with specific titles followed by three modular sections going down the page. Here is an image of the top of the website: 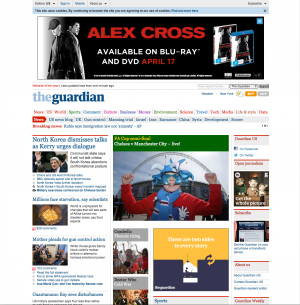 Right under the ad, you can see that there is a little mention that the site won “Website of the year.” Upon clicking the link, it brings up a page stating that the site was a winner of the Online Media Awards in 2012. In the bottom left you see the start to the name of The Guardian; however, you never really see the name’s ending. It scrolls past you off the page, which, ironically, I think it a poor design choice on behalf of the Online Media Awards website designers. 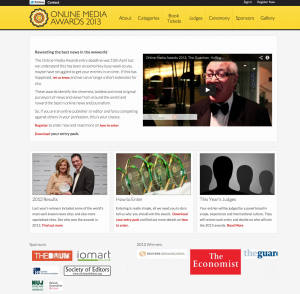 Instantly I can connect the website to the paper. Its nameplate is identical, although rather than being on the right side of the paper, it is on the left side of the site. I also like the idea that there are a lot of categories to choose from right at the top of the page. Including special links right underneath to access more news and a rotating bar with several links per minute.

There are a lot of different colors on the page, especially at the top and throughout the entire site where there are several pictures. But, mostly, they rely on blue for headlines, which matches the overall color scheme of the paper’s color use. The typography is also very easy to read, and when matched with the color, it’s simple to follow: headlines and key points in blue, text, teasers in black. 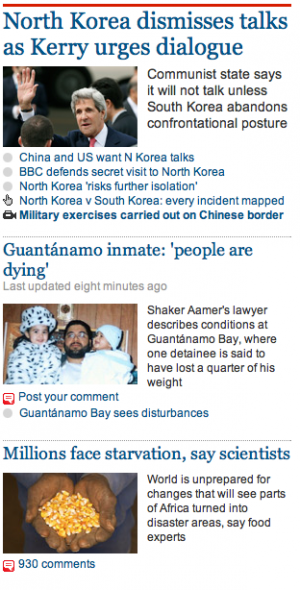 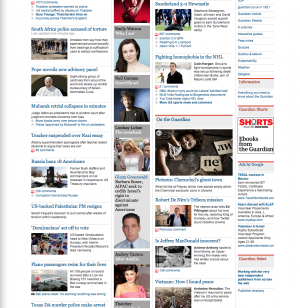 I also appreciate the grid structure that the site uses, and how they use it. I think that the site is using an 6-column grid on the site, which they then break down into three sections: two columns on the left for news stories, three columns in the middle for entertainment stories and the final column as an about The Guardian and extra features section. The stories then scroll down the page, but the best part is that it easily breaks up what most readers go to the web for anyway.

The way the site mixes in photo and web series into the front page is very nice as well. As you scroll down, you get a mix of photo and video stories as well as the traditional print story with maybe one or two pictures accompanying the story. I think it says a lot about respect toward the photojournalists, video journalists and reporting journalists: they are all on one staff. I know that I am probably making a stretch, but part of me really enjoys that it’s nicely mixed. (Granted there is a special section for videos as well, but for the most part, the site nicely mixes the two). 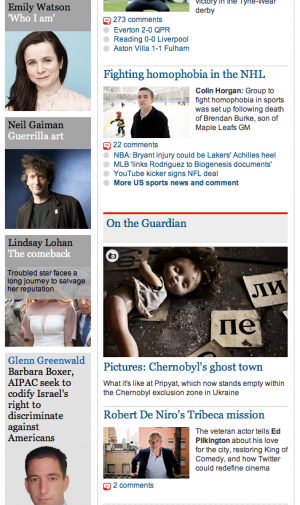 As much I like the website, there are many aspects that give me conflicting feeling toward the overall layout of the design.

First, I will go back a little bit on what I said. I do enjoy that photo stories and videos are mixed in with the rest of the stories, but obviously video stories and photos should be something that the paper should want to highlight. This paper, instead, buries them. I think it would be more attention grabbing if some of the special features were toward the top of the page. I have been looking at the page since the start of the semester for these assignments, and the site generally stays the same.

But, speaking of burying objects. I do like how the grid is set up, but I don’t think that it is executed as well as it could be. As I begin to scroll down the page, all of the (many, many, many) stories and features start to feel lost and jumbled together. I’m not sure where to look. I suppose their rationale could be, “well, it depends on what stories you came here to read.” I’ve heard that excuse before at a conference, and to be honest, I don’t think it holds much weight. No matter why I came to this website, if I took the time to scroll down, editors should want everything to grab my attention, and really nothing pops out. That’s a lie; the moving advertisement on the right hand side of the page holds my attention (and I don’t think that that is the best option for editorial content.) 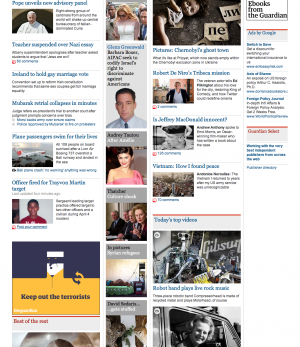 I also don’t like how small The Guardian’s nameplate is on the page. I feel like it should be the first thing that I look at, but instead, I focus on the advertisement directly above it. (Pictured above.) 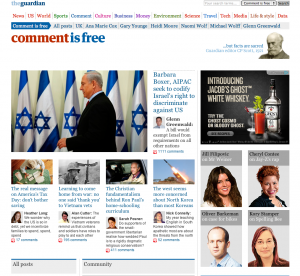 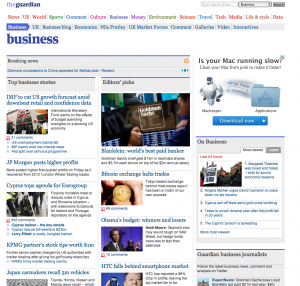 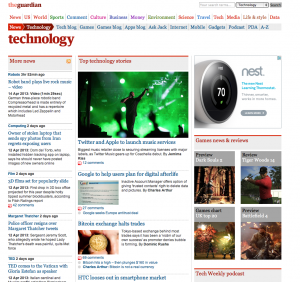 Overall, I am not so surprised that the publication won an online media award. Comprehensively, the site is plentiful and very informative. There are tons of interesting things going on, including interactivity and compelling photos. It’s obvious that site holds a lot more than the print does, and I think that The Guardian’s use of the website is modern, meaning that the staff understands how to relate to the readers that might not pick up a paper anymore (or if they are young enough, the readers who never have picked up a newspaper). The main problem, for me, is that the publication’s online material can pummel itself, making compelling stories pop off the page and grab a reader’s interest.