After examining several covers of The Nation, the purpose of the cover is to highlight the most important article of the issue and provide readers with an illustration to go along with it. 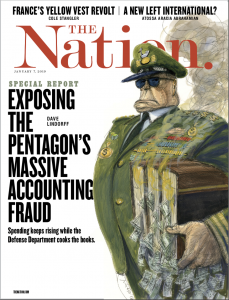 The Nation tends towards cover that feature a cartoon, usually political. This illustration supports the main story of that issue and is accompanied with a large cover line for that central story. The cover image is used to introduce the reader to the main article of the issue. 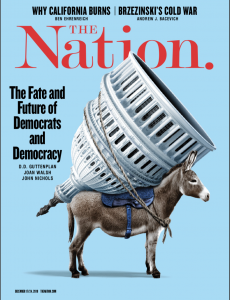 Consistency is maintained from one issue to the next by continuing the same basic hierarchy. Each cover features the nameplate at the top, larger cover line about the main story and illustration to go along with it, and several additional cover lines at the top.

The cover of each issue of The Nation is usually about a political topic. Although political topics would usually seem to be more serious, the illustration for the main story on the cover lightens the attitude of the piece, like the cover below. 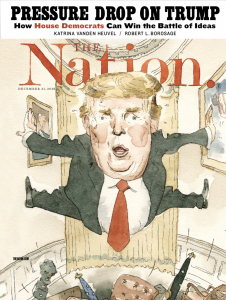 The table of contents does not have its own page in The Nation. It is alongside a front-of-book piece as a side bar and is only on one page. It does not include any images.

Going along with their political nature, the different sections of The Nation only include Up Front, Features, and Books & the Arts. The regular features are in the middle of the magazine and differ each issue. 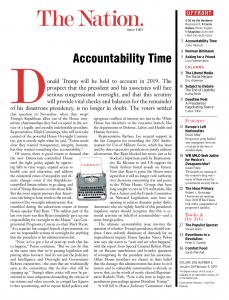 The Nation has a simple marker running at the top of all the pages. It contains the page number at the outside edge, the nameplate in the middle of the page, and the issue date on the inside. These three parts are connected with a light line. It doesn’t change for each section and is consistent throughout the entire magazine.