For the front page, The National uses at least one (it’s usually two or three) big compelling photograph above the fold to draw the reader in. The front page is different than the rest of the paper because it includes skyboxes and promos for the stories inside the paper. The photographs on the skyboxes are cropped to fit a rectangle to tease the reader who will want to see the full image.

The overall purpose of The National’s front page is ultimately to attract readers and draw them in to the inside stories. It gives an overall idea of what can be found inside of each section, almost serving as an index page of the most relevant information. To achieve this goal, it uses the following design elements:

All these elements help organize the information and give it hierarchy. In most front pages of The National, one to three skyboxes help give color to the page and draw the attention of the reader to some of the most relevant information that can be found inside. Then, the nameplate with the date and website create a visual separation announcing that the most important news of the day are the ones bellow it. 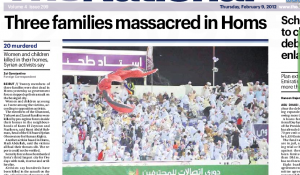 Around five stories are featured in the front page and approximately six are promoted with the use of teasers. The use of sans-serif type and large compelling images give a modern feel to the front page. The paper used is whiter than the traditional newspaper page so it feels clean and the use of cold colors helps to balance the shiny colors in the images.

The consistency of having four or five featured stories, two or three skyboxes and always having the “inside” sig helps the reader understand the paper and know where to look for the information. As with any graphic design, consistency is important to keep readers engaged. Also, being consistent shows even more benefits when the newspaper wants to do something really flashy for a particular event. Then, it would catch even more attention than if the design changed every day.

From the front page of The National the reader can feel that this newspaper is trying to be modern, featuring stories from all over the world while still focusing on local news. I could say this is “the newspaper for the modern citizen of the UAE;” it looks cool and clean and fits with the big modern constructions going on in the UAE. However, I’ve never been to the United Arab Emirates so I couldn’t be sure of this. It’s the impression that I get.