The National uses mostly medium and wide shots. I’ve noticed they try to have colorful images with presence of active human figures or faces. This adds color to the pages and also makes them more interesting since The National’s design is very traditional and structural; they never do wrap-ups or superimpose photos, for example and the images are mostly rectangles. The images are usually run three to four columns wide and there are at least two photos per spread, which also helps to draw readers into the stories. Most articles have one photo but there are some that have none and others that have two (but never more than two). 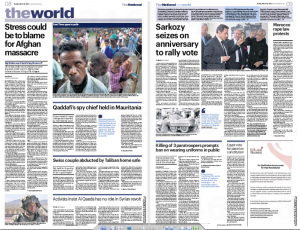 For the skyboxes on the front page or section-front teasers, the photos are cropped to a small rectangle to serve as an eye catcher but this type of cropping rarely happens again throughout the paper. 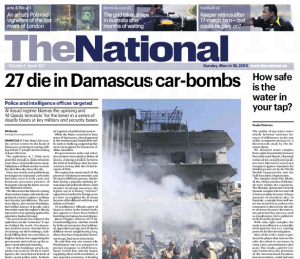 While the images add color to the pages, it’s not a messy scene; the color selection seems very intentional. The colors in the photos always match the palette used throughout the whole newspaper.

The content of the photographs is always related to the story, of course, but many times it serves almost as a second headline. Most of the images really capture the reader’s eyes and add something to the story. Naturally, there are times when the images are merely illustrative to show the person being interviewed or a sports player doing a move. However, the quality of the photos is very good. They are well thought and composed.

That being said, there’s a high respect for the integrity of the images. I could rarely find examples of type being placed on the photos. It had to be a particular occasion like a section front such as this one: 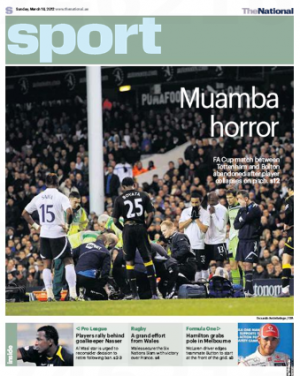 But this doesn’t happen very often.

Overall I think the use of the photos, their colors and contents match very well with the style of the newspaper and the image they try to convey to their readers. Very structural and clean.