TIME does a good job in the terms of color as a news magazine. The magazine goes for a simple look as it doing its design.  For example the main colors that it uses would have to be red, black and white. Mostly all the time the name plate is always red but sometimes the color of the nameplate will change do to the a different. 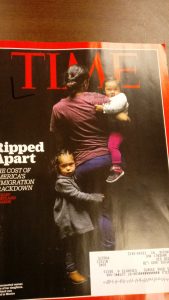 An example of that would have to be the most recent issue about the students from Parkland, Florida.  TIME is always consistent with the colors that they use in its publication because they try to stay the same with each issues especially having  a red border for each issue.

For the cover of the magazine, the nameplate is red with a red border. In the March 19 issue the name plate is black. 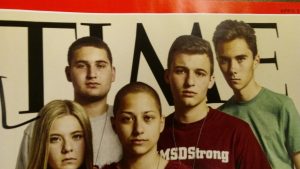 Another thing that is noticed is for the cover line stories the words are white and red text but in the most recent issue the text is the same color as the name. That issue breaks away from its consistency on the outside but it still uses the same color scheme in the inside of the magazine.

Sections: For the brief there is a sub section called on the record in which numbers, graphics and important facts are highlighted  in the colors of red, black and gray. 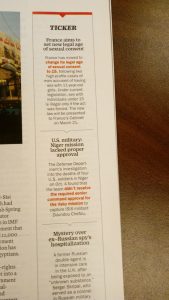 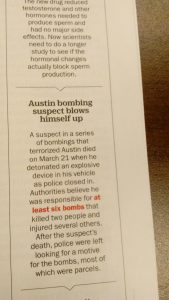 This works well with because it sticks with the color consistency that is in the publication. This was recently changed but the main  section head called The Brief is white text over a photo and this kind of adds some texture to it.

One thing that I noticed about it was that for some small blurbs the color of the text, it would be in red to highlight the most important fact. The image above shows what the magazine does. This also helps to give some kind of hierarchy in the publication.

For the pull quotes, TIME would do one of two things. One would be just to make the the whole quote in red or another way would be to make the quotation marks red. I think that TIME does this because it wants to have consistency to break up all the black type and to make everything flow together. Me as reader it helps to give me a break and take a look at something else. 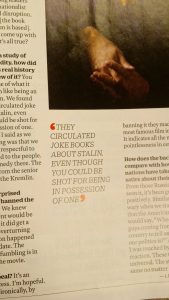 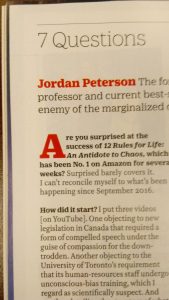 For these sections a lot of things are going on in the terms of color. For each issue it seems like the photos that they use follow a certain color scheme. In one issue in which the article talks about how the husband of an undocumented immigrant was deported and the byline is the same color of the women’s shirt is pink as in the photo. 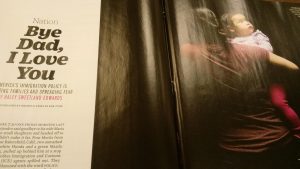 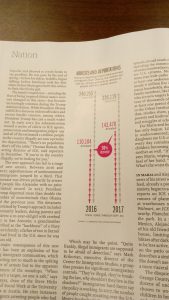 Another example would be another story about frozen being on  Broadway and how the drop cap and the headline of the section is a teal blue color coming that from the image. The one thing that I noticed was that in the publication it tries to take some colors from the photos to help it break away from the usual color scheme of red, white and black. Also to make a page look more creative. 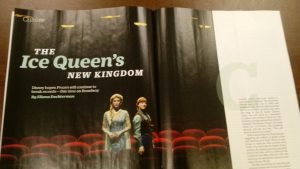 For body copy the publication uses the color black but it will at times use red to highlight an important sentence or quote.  The kinds of images that are used will be based on the tone that the magazine is trying to convey. TIME uses black and white photos for two reasons. One would be to show something in the past like the example below or it would have to something serious. Also I think that the images that are used goes well with them for a news magazine. The images that are used seem to be unedited and goes with the color scheme of the magazine. It uses a red background for the cut out head images of the people and red text color to show who the person is and what are they known for before going back to the black for the body. 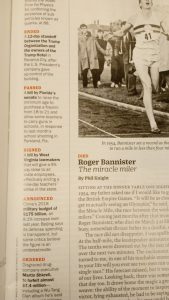 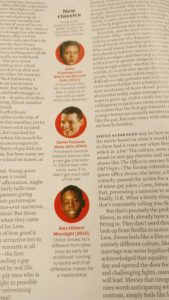 With color TIME magazine does a good thing with color. One thing that it does is that it sticks to its same color theme for each issue. Also it tries to use natural colors instead of  using bright colors so that it will be taken seriously as news magazine.  Bright colors like neon yellow and pink would not work for this publication. Also the color helps to build some kind of order in the magazine. Finally, TIME does a great with the colors because when I think of red it reminds of something like blood but TIME would incorporate other colors to make it look more pleasing to the eye. The color red woks well to be used a news magazine.