Before The Guardian completely changed its layout, the paper used three typefaces: Helvetica, Garamond and Miller. But, on September 12, 2005, when the paper debuted its new look, it also presented a new typeface, “Guardian Egyptian.” The nameplate went from this: 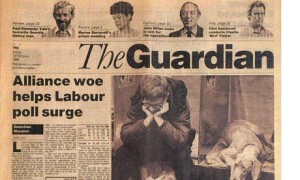 Guardian Egyptian is used unitarily used throughout the entire paper: Nameplate, captions, body copy, subheads, etc. The typography is used at varying fonts, more obviously using heavier and larger weight for headlines and “Roman” for body copy. I can only assume that when designing the typography that the designers stemmed several options to choose from. However, the more I investigate the paper—aside from the fact that I’m sure this typeface was meticulously created strictly for The Guardian—having only one typography really does connect the paper nicely.

Although The Guardian has a new friendly looking layout, the pattern of the type and how it falls within the publication translates as traditional. Or simply, more important stories: big, bold font, smaller stories: small, light font. This is how the paper guides the reader around its content, changing the weight of the font throughout. I will say that for a new layout, I’m rather disappointed with the conservative nature of the paper. I generally really like the Guardian Egyptian face, but it’s far from exciting, and it’s not amazingly attractive. The face definitely captures a modern vibe for a traditional medium (and maybe that was awesome in 2005), but I think that designers need to punch it up again. Flipping, or clicking, through the paper, the size of the headlines guide me, but never grab me. 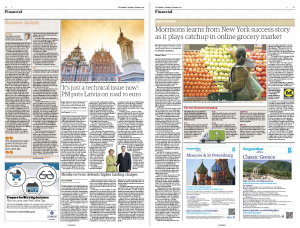 I think that it’s beyond evident that the type exudes not only a (very subtle) more “today” feel, and the typeface accurately reflects the changes of the newspaper industry. And, more importantly, I think that readers can understand and appreciate what the paper is doing with the type. However, I don’t think that The Guardian comes through with the modern nature of what this typeface could represent. Like I said, text never grabs me, and often is fighting against smaller headlines and (naturally) pictures. For instance, when I look at the pages above, the headlines are really struggling with the photos for attention. My eye goes to the photo first, as anyone’s would, but I never want to go to the headline. I kind of get lost on the page after the picture.

When it comes to reader perception, I found an interesting quote from a fictional television character on the 1980s British television show, “Yes Minister.” The quote, said by character Jim Hacker, is: “Don’t tell me about the press. I know exactly who reads the papers: The Daily Mirror is read by people who think they run the country, the Guardian is read by people who think they ought to run the country…” If this quote is true, and the audience is the similar to that of the ‘80s, the modern typeface mixed with the conservative feel seems accurate to the nature of the audience.

The more exciting things about the publication’s typography generally happen on the front page and sometimes sprinkled throughout the rest of paper. The front page allows the type to show a slight contemporary tone. The color in the front page really (to me) showcases what this new typography does for the newspaper, or what it could do for any newspaper. Having the nameplate in color and making the “the” lighter, not only brings your eye directly to “Guardian” first, but it allows for a subtle tone in the name and type design. 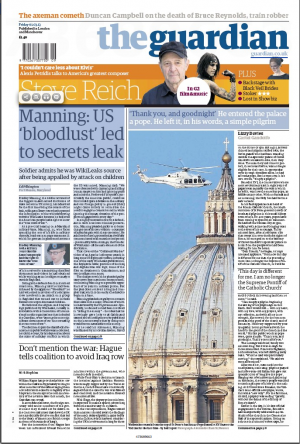 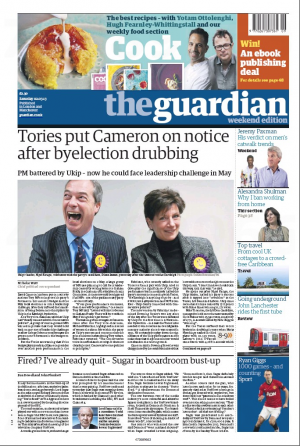 I think that The Guardian’s new look compared to it post-2005 layout is a vast improvement. However, I don’t think that the paper is reflecting how much further the industry has come since 2005, and it shows in its typography. The new Guardian Egyptian is a great looking typography, but sadly (when not maximized) ends up landing with a conservative clunk.