The New York Times’ typography has a fun history.

After abandoning the old-fashioned broadsheet tradition of multiple typefaces in headlines, the paper got its very own typeface: Times Cheltenham. The already-existing Cheltenham was tweaked for the Times. Cheltenham was originally thought to be used by the Times starting in 1906. In 2003, in the decision to use Cheltenham exclusively, the Times carried only the bold italic font, and revamped everything else for headlines. 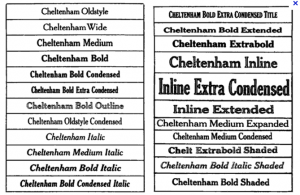 The International Typeface Corporation calls Cheltenham “straightforward” and “no-nonsense.” ITC revived Cheltenham and increased its x-height and it gained popularity in the ’70s. But still it was just one of many used by the Times. For more of Cheltenham’s history, read this. 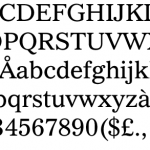 Beyond the headlines, the Times has used the typeface Imperial for body text (and cutlines from what I can tell) for quite some time. The paper is almost entirely composed of serif fonts, from the heads to the body text, with a few bolder san serifs acting as labels for consistent story packages or features. 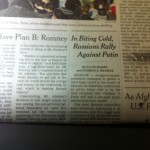 The many manifestations of Cheltenham

Many of the display types found in the times are varied. On the front page alone, and in just one story, the Cheltenham typeface can manifest in three or four fonts, with different italics, kerning, and size. The Times relies on these ways of varying typefaces and rarely uses bolding for emphasis.

On the other hand, some features sections, especially the travel section, use light fonts within the Cheltenham typeface – and it helps for the pages to appear more delicate and fun, without actually making the other more newsy pages look dramatic or overstated. It’s kind of a great feat.

Cutlines and body copy use almost the exact same typeface. The x-height of the cutlines is smaller than the body copy, but to the undiscriminating eye, it’s hard to tell the difference. Neither of these is changed much to create emphasis, except some cases of increasing size slightly. Another technique the Times uses in typeface is to slow down or speed up the reader with line spacing. In features sections, the lines can be almost double-spaced to ease up on the urgency of the story. The white space is savory – and I find this technique to be reproachable in many other uses. 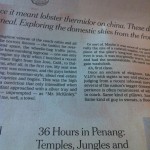 Cheltenham's lighter side, as a features' font.

It’s tough to guess at what makes the Times choose italics for one head and roman font for another, but overall it seems that the New York Times tends to favor minimal, but slight variance. I imagine that they approach busy pages with a guiding principle of creating slight distinctions without straying far from the standard.

I’m a fan of the Times approach to typeface. Cheltenham is a typeface I find particularly appealing. It’s simply attractive to me. Its family is expansive but cohesive. While it handles a lot of flexibility, I still find so much comfort in it because it’s so consistent and in my mind, associated with The New York Times brand.