A typographical overhaul of the The Los Angeles Times’s print edition took place in 2002 under the brass of then-Design Deputy Managing Editor Joe Hutchinson, designer Roger Black and David Berlow, who was hired from Font Bureau, a company that specializes in testing font suggestions as part of newspaper redesigns. The paper decided to maintain its “seventeen century design,” but the trio was charged with modifying the paper’s type. The classic design format, Hutchinson said, is buttressed by the “dynamic contrast with text, the spark that illuminates the design.” Splashier, bold typefaces, including Belizio, LA Gothic, Victoria and a range of Benton Gothics are employed throughout.

The paper’s name plate type aligns more with the old-timey, seventeenth century feel, with its blackletter format. Blackletter, first introduced in the late-1600’s, is maintained by a number of U.S. newspapers, today, as the type conveys a sense of “familiarity, authority, dignity and tradition.”

In keeping with type  that presents an air of authority and dignity, the Los Angeles Times utilizes Belizio typeface. For its more light-hearted sections, such as the Calendar section, the Times employs color. The typefaces also appear capitalized and have blunt, serif endings. 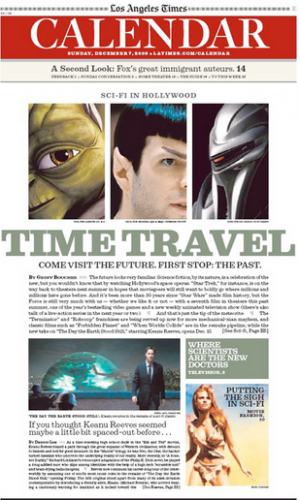 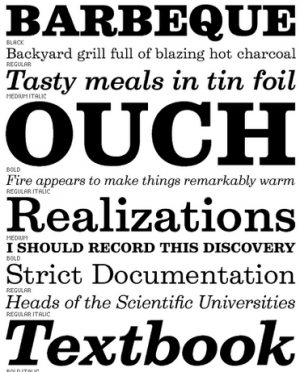 Heads and decks for feature stories are presented in Kis, a serif typeface. Some trivia: Kis typefaces were an invention of Nicholas Kis, a Hungrian punch cutter who worked in Amsterdam, according to myfonts.com. An example of the Kis typeface in the feature titled “Too Big to Fail.” 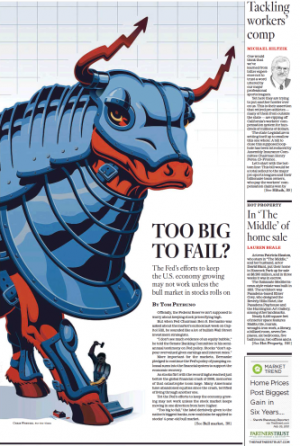 In order to distinguish opinion from straight news stories, the Times presents columns with italicized headlines preceded by bold, capitalized red text indicating the story is a column. I couldn’t find an article definitively confirming the Time’s body copy type though, in my opinion, it closely resembles Georgia. Ultimately, I personally feel the Times marries sophistication and playfulness well in its selection of type — the paper isn’t afraid to go big and add color to type when appropriate, though it exercises restrain when the tenor of a story calls for that treatment.