Keeping with its simple, straightforward aesthetic, Mother Jones wisely uses its copious amount of white space with a selection of serif and sans-serif fonts in order to present its text in a legible fashion. The magazine itself doesn’t feature an enormous amount of typefaces: in fact, when you peruse any given issue, you’ll find that the headlines, bylines, cutlines, body copy, etc. are all derived from the same handful of typefaces. This could’ve run the risk of becoming monotonous for the reader, creating a bland sameness issue after issue, but Mother Jones successfully manages to circumvent this issue by varying the lightness and boldness of its fonts throughout, making these choices for the sake of identification of information, as well as for emphasis. 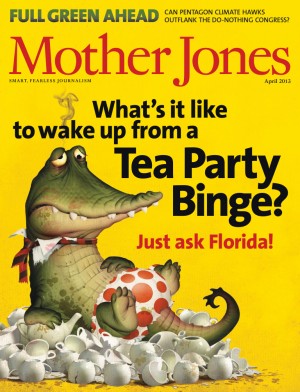 Mother Jones cover, as the gateway itself into the magazine, aptly demonstrates just how typefaces will be used throughout the rest of the issue. With the exception of the magazine’s nameplate and it’s “SMART, FEARLESS JOURNALISM” tagline, all of the typefaces featured on the cover are sans-serif, allowing the bold fonts to pop right off of the empty yellow background throughout the cover. This particular cover features a lot of bold sans-serif typefaces, but that isn’t always the case. Last issue, for example, used a lighter serifed font, albeit very large (almost comparable to the nameplate.) Using such bold typefaces, or lighter typefaces at such a large size, works well in giving their cover stories a level of urgency that grabs a reader’s attention. The teaser along the top of the current issue is in the same sans-serif bold typeface as the cover story’s headline, but in all caps, allowing it to garner attention from the other text on the cover without competing with the rest of the text. The teaser’s descriptor sentence (“Can Pentagon Climate Hawks…”) is in a much lighter font, establishing its lower place in the hierarchy of what needs to be read with consideration to the rest of the elements. 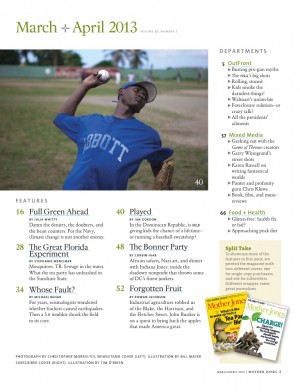 Looking at the Table Of Contents, you can see that a serif typeface now prominently features on the page. In fact, the story titles are in the same serif typeface that is used in the Mother Jones nameplate. This would normally be something to avoid, as it would possible rob the nameplate of its unique aesthetic, but it works well here. The bylines for each story, as well as the “FEATURES” heading utilize a lighter, slimmer sans-serif font, which downplays their importance on the page. This is actually a reversal of the relationship between serif and sans-serif typefaces on the cover (or, at least, the current issue’s cover). 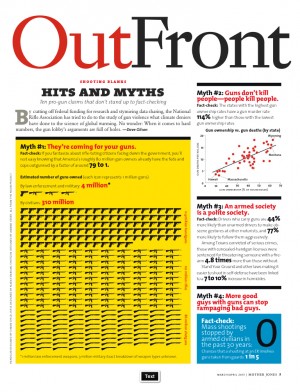 The OutFront page displays its title in that same serif Mother Jones nameplate font, but at a huge scale. The magazine is wise in using fonts that aren’t nearly as heavy at a much larger size, as they still remain prominent, but not overpowering. This page also shows one of the first appearances in the issue of a typeface that is very bold, very thick, and has very blocky serifs. I also noticed that even the magazine’s infographics utilize the same typefaces and overall aesthetic of Mother Jones.  This is a smart choice, as busier graphics that used fonts outside of the magazine’s stylebook would upset the overall uniformity of the publication. 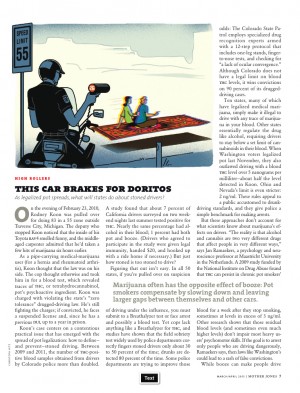 When it comes to the stories themselves, Mother Jones tends to favor the chunkier serif font fully bolded for the headline, with a very light italicized serif font stating the subtitle.  The contrast between these two looks great, and lends the page a more modern typeface treatment, even with body copy that ulitized a fairly standand (but very legible) serif typeface. The liftout quote is in bold, but isn’t nearly as prominently bold as the headline, allowing it to sit high in the page hierarchy, but still rank below the headline. 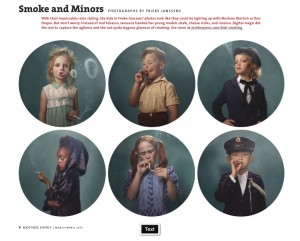 This “Smoke and Minors” piece, as a spinoff feature from the “Doritos” article, utilizes a different format than we’ve seen previously. It’s headline is bold and chunky serifed, but isn’t in all caps like the headline from before. Also, the extended subhead is entirely in red, calling some extra attention to the piece while setting it apart from the article it shares page space with. These subtle changes allow the reader to know when they are encountering a new article or story without violating Mother Jones’ use of white space by using extraneous lines or boxes to separate them from one another. 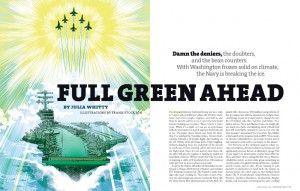 This two page spread that introduces one of the cover stories bolds “Damn the deniers” to great effect. This boldness matches the headline, but is also consistent with the font family used in the subhead that the phrase appears in (which sits above the headline in this case). This consistency is largely evident throughout the publication’s history, with a change of color, a bolding or italicizing of choice clips of text, and the overall size of the text playing directly into the content’s hierarchy within the page, and in turn, within the magazine itself. 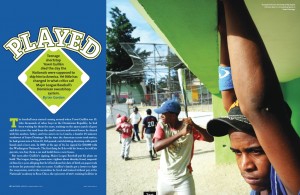 Although I enjoy Mother Jones’ more minimal, less-is-more approach to typefaces, I found the treatment of the headline above to be a bit problematic. By adding two layers of stroke to the arced headline presented here, I felt that the magazine is drawing a bit too much attention to it. It also seems to shatter the magazine’s attractive simplicity of their typeface treatments throughout the other issues. Granted, they’re still sticking to the short list of fonts in their stylebook, but this type of distortion becomes distracting, and even a bit gimmicky, showcasing a rare misstep on the magazine’s part.

As a whole, Mother Jones demonstrates a understated, almost subtle mastery of typeface use in order to highlight and delineate between stories throughout its publication. The magazine prides itself on quality journalism that is meant to be respected, so this more reigned-back approach serves its content well, providing it the dignity it deserves.