Nameplates-The name of a newspaper as it’s displayed on Page One. It is the visual that the audience most often associates with the publication and its brand.

Wired consists of alternating black and white font on contrasting backgrounds. While Wired’s nameplate is engaging and instantly recognizable, it comes across as rather sloppy and unorganized to the eye. 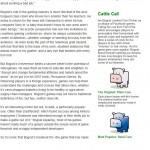 Sidebar – A sidebar is accompanying text to a feature.  It is not essential to the main story, but adds to it.

This article talks about a game called Cow Clicker.  The sidebar includes the different cow designs that the designers created for the game and a background on each one.  While it is an interesting read, the sidebar does not separate itself from the surrounding text very well, which makes it difficult for it to attract the reader’s eye and attention. 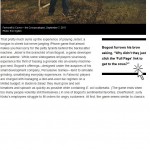 In the same Cow Clicker story, this pull quote is a statement of frustration by the game’s designer.  It does a nice job of making itself noticed, but it would be nice if the magazine kept a consistant design for the creation of all of its pull quotes. 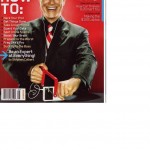 Teasers & promos – A visually stimulating graphic and text that promotes a feature or article inside the publication.

For this promo, Wired takes an iconic figure (Stephen Colbert) and have him literally hacking into an iPod.  This visual is meant to compliment the “How To:” type to it’s left.  The visual leaves the audience interested in opening the magazine and reading the story.  The type in particular does a commendable job of attracting the reader.  It is bold and stands out, drawing the eye and therefore the curiosity of the reader. 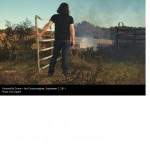 Cutlines – The caption of a photo or artwork.  It generally gives more information about the photograph or visual.

This is again taken from the Cow Clicker story.  I chose this to serve as a relatively bad example.  While the cutline does a nice job of not taking attention away from the photo, it does not give adequate information in describing the photograph.  The text could also be larger or bolder, as to be more distinguishable.

Folios – Type at the top of an inside page with the publications name, date and page number.

I wanted to include this because I found that Wired did not include a folio on many of its pages.  I had always thought that to be the norm, but perhaps not.  However, there may be a difference between the digital issue and the print issue, which I will research more. 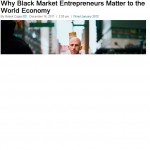 Wired stays consistent with its bylines throughout most of their stories.  They give the name, date, and issue.  They do not strike me as creative however, and more could be done to make them pop, rather than look simple and plain. 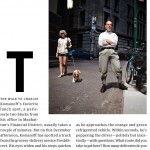 Wraps/skews –Text that wraps around a photo or visual.

Wired heavily features wraps and skews.  The text still flows fell and is easy to follow, but permits for the eyes to take a break and look at the accompanying picture or images.  This fits well with what Wired is trying to do, as they rely heavily on pictures to create their content and appeal to their audience, rather than just text. 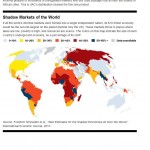 Boxes – A box is a ruled border around a story or art. It used to organize and separate elements and also for decorative purposes.

Once again, the magazine heavily features boxes to separate images.  Oftentimes, the image is a infographic providing the reader with information that cannot be easily expressed in words.  They are elaborately made, but are rather concise and to the point, allowing the reader to focus on the visual.  It does a nice job of maintaining separation between text and visual. 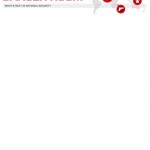 Section Flag: Identify the various section of the magazine and allow for direction throughout the publication.

Wired makes sure that each of its sections are easily identified by creating unique section flags.  They all vary drastically from section to section, with the only common ground being the type/font.