Wired has fun with words on its covers, highlighting the magazine’s cool, laid-back persona. They frequently use words to highlight details on the covers. Also, their folio features both the issue date and a couple more words on the cover story. For example, the hed on the February cover is “think big.” The folio? “No, Bigger!” Similarly, the March cover story is “Star Wars is BACK!” The folio is a phrase used by fans referring to a controversial change George Lucas made in a later release of the first film: “Han shot first.” 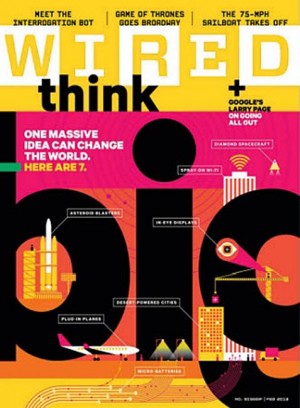 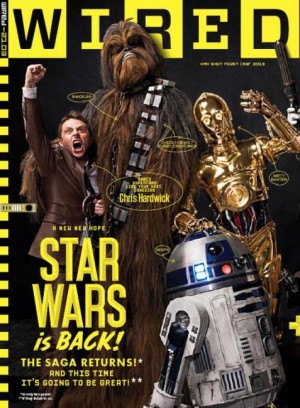 The names of Wired’s three departments — Start, Test and Play — are appropriate reflections of the content but also have a bit of character. Start mostly covers current science and technology. A lot of that content has to do with innovation or what’s new, so Start is a subtle but fitting moniker for the department. The name for the reviews section, Test, is a bit more obvious; it’s the department where they put new products to the test. My favorite department is Play, home to geeky pop culture content. The name reflects that the content is less newsy and more fun. It also takes on a secondary meaning when video games and gaming culture are part of the coverage.

The names of a couple of recurring FOB pieces in the departments further display the voice of the magazine. In Start they have a column called “Dear Mr. Know-It-All” where readers can send tech questions. Play has a piece called “Angry Nerd,” a short rant on a geeky topic.

Headlines tend to run five words or less, something with impact, with deks that elaborate a bit more and run a couple sentences (only one sentence if it’s a department). In print they also blow up the ledes on features, displaying them so that if you’re flipping pages and happen to miss the opening spread, you could almost mistake the lede for a hed/dek.

Bylines for writers simply read, “By ___” while visuals are credited “Photograph,” “Illustration,” “Infographic,” — whichever is appropriate — “by ___”. Photograph and infographic feel a bit more formal than photo or graphic, which kind of surprises me given the generally loose tone of Wired as a whole.

The TOC recycles heds when referring to stories. They promo features sometimes by using modified versions of the dek, or with a slightly more descriptive couple sentences. But in general, promos have the same feel as the heds.