Headlines:  I suppose this is where the entertainment/news elements mix the strongest.  Some headlines offer a very fun approach, where others are worded in hard news fashion.  I found that it largely depends on where in the magazine the story is placed.  An examples of a very entertaining/curious lead would be “Google Busted With Hand in Safari-Browser Cookie Jar.”  And on the flip side, the magazine also gave the headline “Obama Pushes Plan to Boost American Manufacturing.”  This headlines is much more newsy.  However, the magazine is consistent in giving most of its headlines decks. 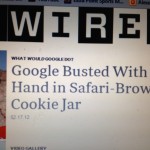 Pull quotes:  Pull quotes are used frequently throughout the publication, but they are rarely given attribution.  It is left up to the reader to read the story and figure out who said the quote.  As with the headlines, the pull quotes vary in style.  In the more feature-esque articles, the pull quotes are flirtatious and their meaning isn’t so obvious unless the audiences reads the rest of the story to give it context.  On the other hand, pull quotes used in some of the more newsy articles are straight-forward and can be easily deciphered.  It all depends on what the story is on that determines the type of pull quote used, but they go a long way towards reinforcing the feeling the story is trying to convey.

Captions: The captions in Wired are usually very brief, around one sentence in length.  There are some occasions where the caption is longer.  Like with the pull quotes, the captions typically mimic the feeling of the story.  Features usually have very light or humorous captions to accompany the picture, whereas newsy articles have a very blunt caption that details what is going on in the picture.

Bylines and credit lines:  These are usually very brief and presented in a traditional way.  For bylines, it is as simple as stating the author of the article before the beginning of the story.  Likewise for credit lines, except they are placed under the picture.

Promos: The promos are almost always alluring and very entertaining, as to draw the reader inside and further into the publication.  They are breif, yet they entice the reader by hinting at “tips” or “secrets” inside.  The promos typically have a very blunt feel to them, but they are usually also attractive.  One such example is the promo “How to Avoid…” which Wired used in a more recent issue.  This immediately draws the readers interest in a fun and inquisitive way and forces them to open up the magazine.

The magazine style is much different than the newspaper style, and it seems to allow for more creativity and spontaneity, whereas newspapers seem to have a very rigid and consistent approach.