The New York Times’ overall conveyance of words is consistency and utility, first and foremost. While I find the Times can be old-fashioned and inflexible, I attempted to give those designers a bit more credit in this analysis. While variation from day-to-day or year-to-year might be stale, the Times does break its own rules from section to section in order to best represent words and news in each of its departments. 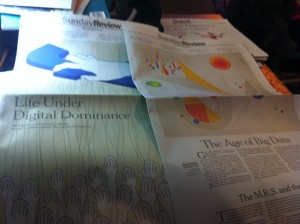 While The New York Times is often tradition its its approach to words, they certainly recognize that some subject matters deserve different treatment than others. The Sunday Review looks a lot different than the Monday news section.

The Times does get creative in its features and editorial sections. It does get clever in its headlines and vary size and placement.  The New York Times can be playful, localized, and even mysterious. Yes — ultimately the Times upholds consistency and utility over all else, but those can be accomplished through variety and knowing the audience of each section and story.

To that end, the types of heads used by the Times vary across sections. Generally in news, heads are relatively short and informative. There is a lot of news to get out on the front page, so an approach of provided multiple entry points is used. Some of these words are clever, but only after utility is considered. 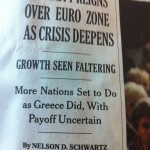 Elements of stories can be set off by commas, but The Times generally favors more headlines (or headlines complemented by one or more decks) over long headlines, as show below. 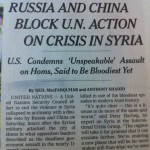 Size of words in the Times news sections matters for hierarchy. Capital letters also indicate importance of words on the page. Major news stories get large caps, as seen here. 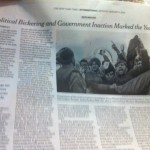 Inside the news section, the Times uses many banner heads stretching across the page, with both decks and subheads.

In sections other than news, hammer are frequent. The opinion section couches conceptual and abstract hammer heads in a lot of white space. This fits the content nicely. The hammers and cushions in white space and are inviting the reader to think a little longer about what they are saying instead of asking the reader to suck up a lot of information in one sitting. 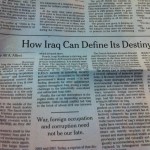 A hammer headline in the opinion section.

For features sections, heads are bigger. In business, for example, the spacing between lines is of note as well as how the package is presented.  That is, the heads and other words are working and relying a lot more on other elements like photos and graphics. More examples of these will follow. 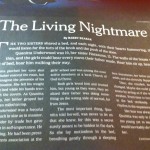 Features also takes a different approach for how the reader will be experiencing the sections as a whole. In these sections, The Times will use a headline on the section cover and repeat it deeper inside the section. 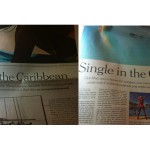 One example of repeated a headline 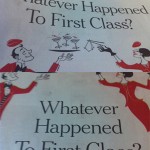 I like this choice of repeated words because it keeps the reader moving through the entire section but ultimately brings him or her back to the promised story.

In really features-y sections, especially Arts & Leisure, heads are far on the side of “creativity.” I couldn’t find great examples in the pages I was looking at, but I’m often frustrated that these headlines are hyper-localized and elitist. At the same time, I can’t fault the Times for knowing its audience. I just can’t help but think that abstract, assumptive headlines would turn away potential readers, even if they are intended to be vague, artsy and esoteric. 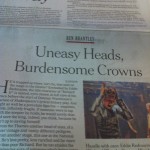 Subheads are somewhat of a rarity in the Times new section, although they use other ways of creating additional prominent information on the stories. In features sections that call for them, subheads are used. 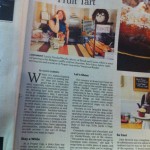 Subheads in the Metro section

Bylines are basic, small, and short. In one of my recent posts, I talked about my confusion over why some multiple bylines are treated differently than others but I haven’t cleared that up. 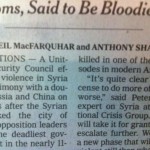 A byline in honor of Anthony Shadid

Promos in The Times actually vary a lot more than I originally recognized. Yes, in news they are newsy: short with buzz words, effective in conveying what they are about, then offering a little more information for anyone on the fence about looking for that story. Times’ teasers often used names and answer the question “what?” very obviously. Features teasers are  little more fun and less formal. They use white space in the design to create a more relaxed vibe. 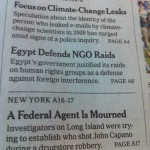 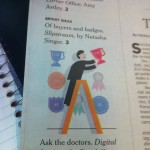 In features, promos get a lot more prominence on the page, with lots of white space and spacing between lines opened up a lot to almost double.

Section names in the Times are quite frankly, incredibly generic and expected – but that doesn’t bother me for this paper. 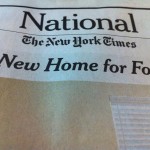 Pull quotes are actually quite rare in The New York Times, though the pull quote style is used to create subheads in some circumstances. When pull quotes appear, usually features sections, they aren’t usually attributed, but they are very straightforward, verbatim and mirror the subject matter of the story itself. 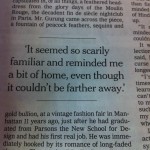 No attribution, exact quote in the Metro section 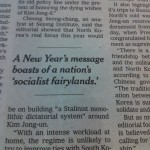 The news section often has these summary "subheads," actually stylized like pull quotes.

Cutlines and credit lines are very similar in the paper, taking up one or two lines below a photo, but there is some creativity explored, too. Some captions have their own small headline, and sometimes the size is increased for feature photos or photos that require a little more explanation. 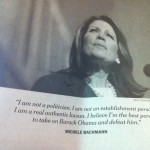 I like how for this one, the quotation is the cutline, and the exact quote is treated specially. 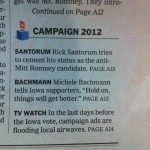 The Campaign 2012 bug is a news example.

As I initially mentioned, each section really has its own identity created by small variations on bugs, heads and bylines. Some examples for different sections are shown below. I generally think that the approach the Times takes here is really effective. It creates consistency from issue to issue but also lets each section have some room to play around and have its own identity. Each choice seems appropriate for the corresponding section, too. More lighthearted sections have more relaxed approaches, while news remains staid and classic. 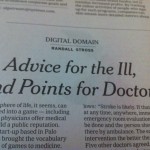 How that combination plays out in the business section - not far variation from news, but byline and bug are given more prominence. 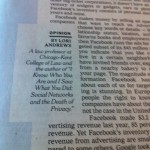 The opinion bug and byline are nestled into the text - seems appropriate since those are essential to the content itself. 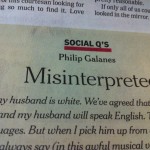 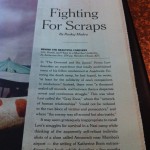 Book reviews take really consistent approach – because the reader is going to be returning to these pages with a certain level of familiarity and expectation. There is also some information that needs to be clearly identified in the article’s presentation. Since it’s a review, we need to know what the book is and who wrote it and some publishing info in addition to the other elements expected like heads and bylines. 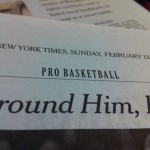 Labels for sports articles are very utilitarian. They help the reader find the sport he or she is looking for quickly.