Being a relatively text-heavy publication compared to most other magazines, Mother Jones puts a lot of emphasis on its words. As a serious magazine dedicated to serious journalism, it shies away from being too flashy with its word use visually, but often opts for wry wordplay and puns within its story titles. A perfect example of this can be seen below: 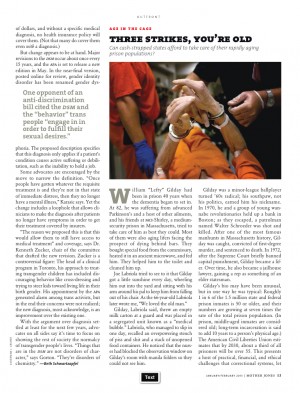 The magazine uses the title “Three Strikes and Your Old,” a subtle twist on the old baseball-related phrase “Three Strikes and Your Out” to title a story examining the state’s response to aging prison populations. Above it in red capital letters, Mother Jones displays another short title that could’ve also worked as a main title for the story: “Age In The Cage.” This one uses a simple rhyme to create a snappy and succinct reinforcement of the story’s theme.

In fact, “snappy and succinct” successfully describes Mother Jones approach to their headlines and pull quotes. In the example below, the sentence “Gasoline lead may explain as much as 90 percent of the rise and fall of violent crime over the past half century.” 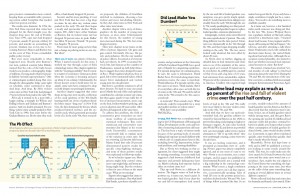 Pull quotes are used rather sparingly in any given issue of the magazine, seemingly only reserved for cases where there is an exceptionally intriguing quote or fact to be highlighted. The fact above does well to grab attention, and the point is hit home that much more powerfully with “the rise and fall of violent crime” in bold letters.

The magazine has always had a penchant for the provocative, especially when it uses headlines such as “Our First Gay Muslim Kenyan Communist Lizard President,” seen below, for a story and infographic about the various conspiracy theories surrounding Barack Obama. In this case, the magazine’s dry sense of humor is strongly emphasized for a story looking to name and dispel some of the more ridiculous accusations levied at the president. 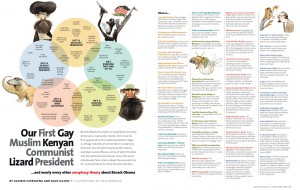 The magazine’s cover relies heavily on its copy to grab the reader’s attention. Although the magazine often uses compelling illustrations on its cover to attract the eye to its cover, its headlines often hold equal weight. Engaging questions that stir the pot are often favored for cover stories, as indicated below: “What’s it like to wake up from a Tea Party Binge? Just ask Florida!” 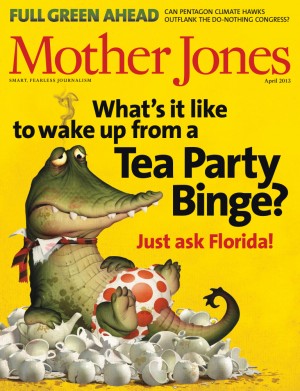 The magazine’s photo and illustration captions tend to showcase a very direct, information-only approach. In the example below, the magazine sums up the two photos on the page with a short “Kateri and James Peterson with two of their children.” Although this particular caption is uniquely positioned below a much more interesting pull-quote, it accurately reflects Mother Jones’ tendency to use captions purely for the driest and quickest explanation of the image or images on the page. 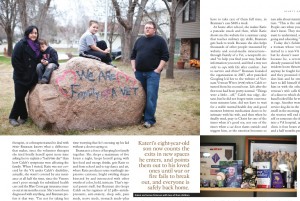 When it comes to department titles, Mother Jones opts for a fairly straightforward approach as well. “OutFront,” “Mixed Media” and “Food + Health” are the titles of their three regular departments, reflecting an emphasis on the publication’s part to let the article titles and pull quotes to allow for a more forceful, flippant, or humorous side of the magazine to emerge.