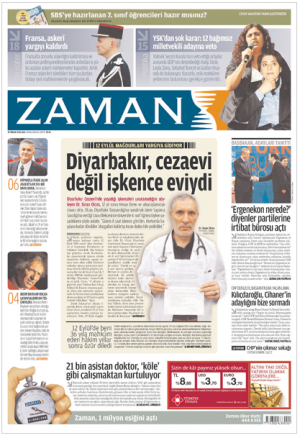 Zaman is a daily newspaper founded in 1986, formatted as a berliner. Though the design is presented as generally modular along the lines of the paper’s grid, Zaman often deviates from it slightly, presenting stories or images in non-rectangular shapes. The visual organization of the paper is strong, and for simplicity’s sake, the paper often uses half columns of white or grey space between stories in place of thin rules. 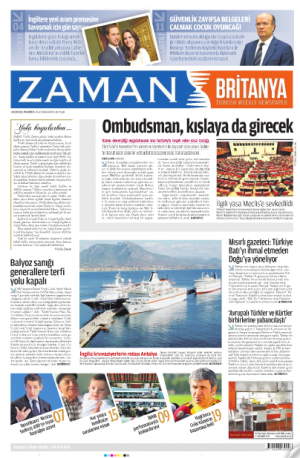 Throughout this post are four versions of Zaman’s A1 from various years of publication, distributed in 35 countries and printed in 11. The nameplate is a strong component to the paper’s A1, adding strong color to the above-the-fold section. Teasers and promos for special features are always placed above the nameplate in different colored backgrounds or with large images, while in some editions, more are placed below. These design components are often designed on a diagonal tilt, or in rotated boxes containing promo photos and occasionally sidebars on the paper’s A1. Each of these components is comprised of more than simple text boxes—the beautifully used blue hues, reversed-out nameplate design, the employment of a single font family for the A1‘s headlines, and the graphic elements such as the sigs that introduce each story all add to the polished appearance of Zaman’s A1.

The font used for Zaman’s headlines creates punchy, factual, and hard-news feelings of immediacy for its audience. It helps maintain their unique feel, and complements the language’s  The paper is known to be related with—but not owned by, the Fethullah Gulen movement, and carried a conservative label with a Islamic moderate view. The A1’s many visual teasers include stories from their Turkish national news, international, business and other news sections, as well as promos for their many columnists, covering current affairs and culture in both conservative and liberal thought. 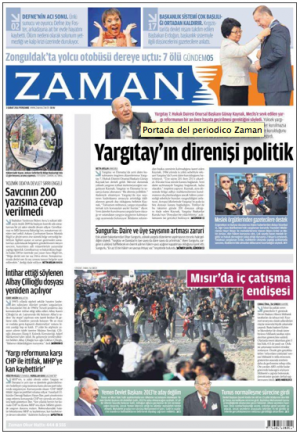 I find it intriguing that Zaman’s main story, while always treated with the largest, boldest typed headline, does not always come with a visual of comparable size to the story’s importance. Often, below-the-fold, secondary headlining stories are granted larger photo space than the top story. This non-traditional method draws reader attention into many different points of the A1 right off the bat, and prevents the paper from appearing too predictable or boring from edition to edition.